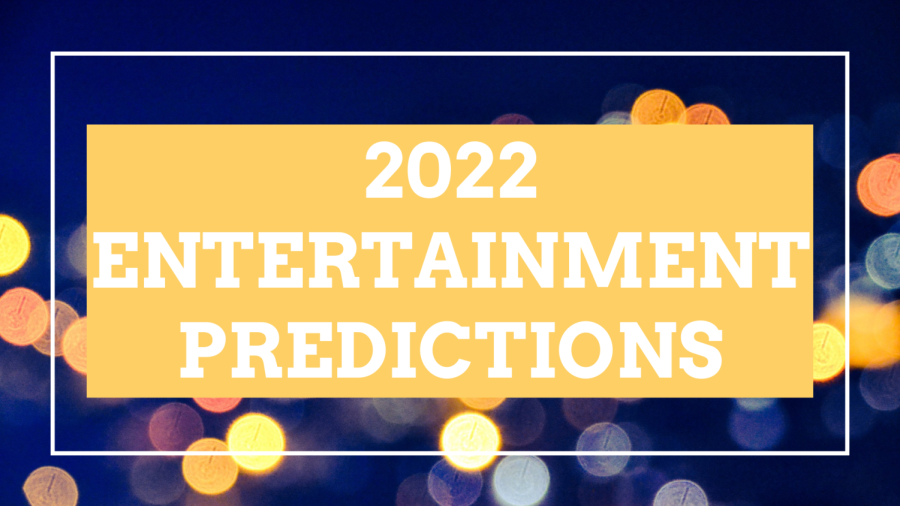 The film box office will continue to act irregularly due to the pandemic but will slowly return to normalcy. “Spider-Man: No Way Home” proved that huge revenues can still be made at the movies, and certain blockbusters in 2022 will reach similar levels. “Doctor Strange in the Multiverse of Madness” will be the highest-grossing film of the year with over $1.5 billion in revenue. “The Batman” and “Jurassic World: Dominion” will also reach the $1 billion milestone. On the other hand, smaller, independent awards films like “The Northman,” “Nitram,” and “Babylon” will massively underperform at the box office, with many being pushed to a streaming service release.

Speaking of streaming services, the streaming wars will really heat up into 2022, with many winners and losers. Netflix will continue to steadily gain popularity and subscribers; while “Stranger Things” Season 4 will be their biggest show of the year, other foreign projects will be massively popular after the “Squid Games” phenomenon. Amazon Prime Video and Apple TV+ will continue building on strong foundations and develop an even more significant presence in the market. HBO Max will suffer due to a lack of exciting content and viewership, but the Discovery and WarnerMedia merger will revamp the service tremendously; the service could even see a rebrand and a name change. Finally, Disney+ will continue putting out unique content, but their subscriber numbers will underperform, leading to more doubt of CEO Bob Chapek’s leadership.

Social media and the creator economy will see massive changes over the year. Many creators will retire current formats or platforms; David Dobrik will officially end his vlog series, and Charli D’amelio will stop posting on TikTok. Khaby Lame will pass Charli D’amelio in followers on TikTok. When he does, he will post a full video on his YouTube channel revealing his voice and backstory. In addition, creators will start rapidly experimenting with monetization, and merch – creator-specific NFTs and cryptocurrencies will gain popularity.

Much to the dismay of my indie-loving, auteur theory, art brain … Mason is absolutely correct. People will go to the movies to see big IP rather than movie stars, good storytelling, and prominent directors; that is how the industry is now. So let’s analyze three big releases this upcoming year.

Spider-Man: Across the Spiderverse is going to be incredible, no doubt about it. The first was a wonder of animation and just a great Spider-Man movie, plain and simple. However, the sequel will still not make the money to match its hype. Everyone, and I mean everyone I know, adored the first movie, but it is still animated at the end of the day. Unfortunately, people hold the stigma of animation being “cartoons for kids,” which caused the first Spiderverse film to be a clear success, but not nearly as much as it deserved.

Babylon is the new Damian Chazelle (Whiplash, La La Land, First Man) film that will knock everyone out of the park. Set in golden-age Hollywood, the Marc Platt production recently wrapped, boasting stars like Margot Robbie, Brad Pitt, Tobey Macguire, Samara Weaving, and a slew of other well-known and talented actors. It’s getting a limited December release and opening up wide in January (I would expect a TIFF premiere). Although it’s way early, this is a sure-fire bet for plenty of awards and a whole lot of fun.

On the flip side, Black Panther: Wakanda Forever has the possibility of being next year’s biggest mess. It’s easily the most anticipated movie of 2022 but has met an insanely troubled production. Not only has it had COVID-related delays, but it’s met Chadwick Boseman’s passing and Letitia Wright’s vaccine complications. With fans begging to recast T’Challa and fire Letitia Wright … poor Ryan Coogler, Kevin Fiege, and their creative team have a lot of work to do.

2022 will be a fantastic year for television! First, with many different streaming services at users’ disposal, many of them will produce spinoffs of fan-favorite shows to try and lure in new subscribers. For example, Peacock is creating a spinoff of The Fresh Prince of Bel-Air called Bel-Air. This is definitely an attempt to sway non-users to subscribe to see one of their favorite shows of the 1990s remade with a dramatic approach. Similarly, Paramount+ is producing a Halo series based on the game with a similar namesake. 2022 will also be the year for more minor streaming services to attempt to gain more subscribers.

Unfortunately, many cable TV shows will also be canceled this year. For example, Riverdale, the CW hit, will be canceled due to low viewers. The show was a big success in its first two seasons. But the show seems to have lost its touch. With the new special three-episode event “Rivervale,” an alternate universe of Riverdale where the characters are immortal, many fans feel like the show has taken a turn of what it started as and not for the better.

For new TV shows, Fox’s Masked Singer will be copied by ABC. ABC does not have many singing shows besides American Idol, and the incognito singing competition trend has proven to be a great success. I think ABC will do their own take on this with fans as the judges but keeping the artists incognito. Also, Netflix will release a new dramedy based in a high school that will bring more young viewers to their streaming service. Cable TV has no high school dramas like it did throughout the 2000s and lost many younger audiences. Netflix makes a lot of content for this age group. We will definitely see a relatable High School Dramedy that audiences need to be hooked on.

2021 was the year for music, including releases from almost all big names: J.Cole, Kanye West, Tyler the Creator, Drake, Roddy Rich and so many more. For this reason, it’s going to be a very quiet 2022 in rap albums. There is the potential for a few good projects from some big-time artists, but the dates are still yet to be confirmed. With this in mind, there is definitely room for an artist to break out.

On Aug. 20, Kendrick Lamar released the “Oklama” file on his Instagram. In the film, he talks about how he is currently working on his last studio album with TDE. The progress of the album is still unknown; however, considering his immense talent and ability to create poetry within his music, it will be fantastic whenever it comes out.

“The Dawn is coming.” In early October 2021, The Weeknd announced that his new album had also been completed. The Dawn is a follow-up to The Weeknd’s 2020 hit album “After hours.” Once again, the release date has not been announced, but there’s hope it will be in 2022.

It was a terrible year for Travis Scott due to the AstroWorld tragedy. In light of the event, it seems like Travis Scott has delayed the release of his highly anticipated album “Utopia.” The album was supposedly going to be released in October 2021, but this obviously did not happen. His previous album “AstroWorld” changed the music game in 2018. This new album definitely has the potential to make waves once again.

In other shocking news, Kanye West is currently working on new music. Westmost recently released Grammy-nominated “Donda” in late August 2021. Although it seems unlikely he would release two albums in two years, it’s Kanye West, so anything is possible.

Finally, there is one artist or duo that’s going to break out this year: Earthgang. Olu and WowGr8 have all the tools: fantastic beats, really good flow and rhythm, and most importantly, incredible duo chemistry. The group is a part of J. Cole’s “Dreamville Records.” With his guidance, as well as a new album coming out in January that’s already generating a ton of buzz, it’s clear this group is going to blow up.