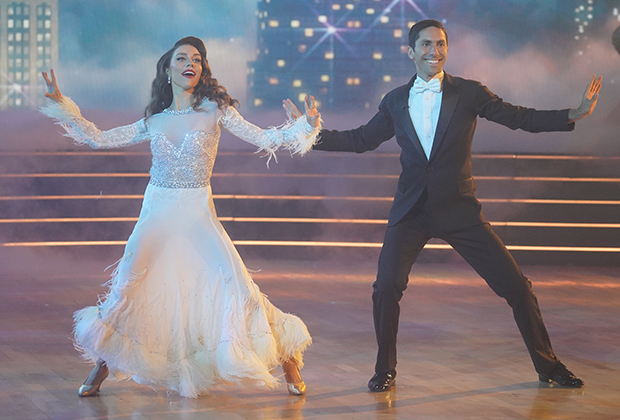 ABC’s Dancing with the Stars waltzed into its 29th season this past Monday and did not disappoint!

Monday’s premiere featured Tyra Banks as the new DWTS host who replaced previous hosts Tom Bergeron and Erin Andrews. The show didn’t have an in-studio audience due to the ongoing coronavirus pandemic and the judges sat socially distanced while the contestants watched from an elevated platform above. To make up for the non-existent audience, producers decided to insert crowd noises that were so loud they sometimes drowned out Banks.

Appearing on “Good Morning America” prior to the premiere of the show, Banks spoke about being the first Black female solo host for the show.

“I like breaking these doors down so that we don’t have any more firsts, but it’s nice to be first so that you can open that door and let so many people in after you,” she said.

However, fans watching at home weren’t too thrilled with the 46-year-old supermodel’s performance and took to Twitter to demand that the original hosts come back. In one tweet it was written that “on a year where people WANT comfort of the familiar… it’s just really a poor decision.”

The problem w/ Tyra Banks as host is that you've replaced the heart of the show. Nothing against her, but it just sounds so off when you hear her voice instead of Tom Bergeron's. On a year where people WANT comfort of the familiar… it's just a really poor decision. #DWTS

And, as if that wasn’t enough, towards the end of the two-hour live episode Banks suffered a minor wardrobe malfunction when one of her earrings fell out.

Another change included Derek Hough sitting in as a judge for Len Goodman. CNN Entertainment explained that “Goodman was unable to travel to the US from London due to Covid-19 restrictions.”

Although things were definitely different this past Monday, fans got excited as their favorite celebrities took to the dance-floor. This season’s cast includes a variety of celebrities like rapper Nelly, Tiger King’s Carole Baskin, and Cheer coach Monica Aldama. Carole Baskin received the lowest score of the night for her dance to “Eye of the Tiger,” and Disney Channel star Skai Jackson and “One Day at a Time’s” Justina Machado tied for first.

According to The Hollywood Reporter, the show “scored a 1.3 rating among adults 18-49 in Monday’s final ratings, its best premiere number since fall 2017 and the highest for any episode of the show since the fall 2017 cycle’s next-to-last installment. It also drew 8.12 million total viewers Monday, the most on broadcast TV in primetime.”

Although things had to change due to the pandemic, one thing remained the same. The show continued to spread happiness to all of its viewers, including Lady Gaga. In one performance, Bachelorette Kaitlyn Bristowe and Artem danced to Lady Gaga’s “Stupid Love,” and Gaga tweeted about it. She wrote, “Is it weird that this made me cry… I love watching people happy and dancing!”

Is it weird that this made me cry…I love watching people happy and dancing! https://t.co/bBKblhVhqT

Lady Gaga wasn’t the only viewer who’s serotonin boosted simply by watching the show. DWTS is known for its light-heartedness, fun, and positivity. It’s a show that needed to return, even virtually, to lift viewers up during this unprecedented time.

If you missed the premiere, don’t worry! The show airs every Monday night live on ABC from 8 to 10 p.m. ET.