Meghan Markle and Prince Harry sit down with Oprah 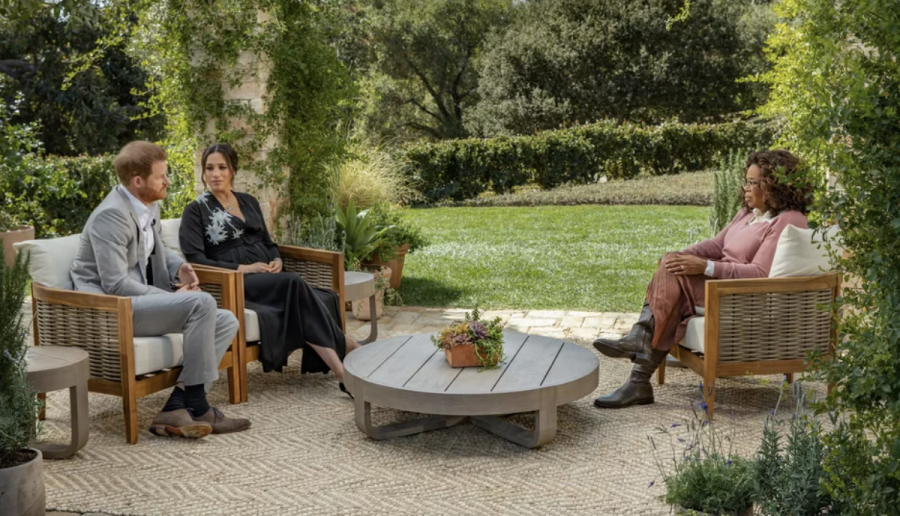 This past Sunday, March 7th, Meghan Markle and Prince Harry sat down with Oprah to give a tell all interview about the reality of what the two had faced during their time with the Royal family. The pair shared shocking revelations about the conversations that went on within the monarchy and how they are dealing with their transition thus far. It was an important and historic moment to witness the truth and the pain that the British parliament has brought upon their family.

Markle got the chance to sit down with Oprah first, sharing the beginning of her experience within “the firm,” Markle’s reference to the Royals. The former “Suits” star opened up about constantly feeling silenced inside the institution. She states, “I came to understand not only was I not being protected, but that they were willing to lie to protect other members of the family, but they weren’t willing to tell the truth to protect me and my husband.” This statement was in regards to a number of tabloids revealing that Markle had made her sister-in-law, Kate Middleton, cry. Markle pointed out that the tabloids painted her as a monster for months on end, while Kate and the rest of the Royals knew the actual truth behind the story, it was Kate that had made her cry in reality. Markle’s pain within the family got even worse when questions and poor statements were brought up about her and Harry’s son, Archie. Markle said, “They didn’t want him to be a prince, which would be different from protocol, and that he wasn’t going to receive security. We have in tandem the conversation of, ‘He won’t be given security. He’s not going to be given a title.’ And also concerns and conversations about how dark his skin might be when he’s born.” That response led to Oprah screaming, “Whaaattt?!?!” and it felt like the scream that resonated with every single viewer watching.

Meghan Markle tells Oprah that while she was pregnant with son Archie, the royal family had “concerns and conversations about how dark his skin might be when he was born” https://t.co/GpDRtrAQgQ pic.twitter.com/qW1PmhXJBB

An extremely gut wrenching moment during the interview was Markle’s revelation that she had suicidal thoughts during her time in the palace. She admitted to telling Harry that there was a moment she “didn’t want to be alive anymore.” Markle felt helpless and went to the “firm” begging for help. The Royal family had then told her that her getting help would not be a good look for the institution. It was then that Markle’s mental health greatly declined and her suicidal thoughts were peaking. She stated, “I was ashamed to say it at the time and ashamed to have to admit it to Harry. But I knew that if I didn’t say it then I would do it. That was a clear and real and frightening and constant thought, a thought it would have solved everything for everyone.”

“I just didn’t want to be alive anymore.” Meghan Markle reveals to Oprah that she began having suicidal thoughts while she was pregnant with Archie https://t.co/ksI015F6tj pic.twitter.com/aSBNTm7eK4

Prince Harry joined the second half of the interview and shared that he felt trapped within the Royal family for a long time. After watching what the press, along with his family, were doing to Markle, he knew he could not have “history repeat itself,” referencing the tragic death of his mother, Princess Diana, while in a paparazzi car accident. Harry stated, “I was trapped within the system. My father and my brother are trapped. They don’t get to leave and I have compassion for that.” Harry also revealed that after Markle and him had announced their departure from the Royals, his father, Prince Charles, stopped taking his calls. Harry also shared what he believes Princess Diana would have thought of his departure from the Royals. He said, “I think she saw it coming. I certainly felt her presence throughout this whole process you know, for me, I’m just really relieved and happy to be sitting here, talking to you with my wife by my side because I can’t begin to imagine what it must’ve been like for my mother going through this process by herself all those years ago.”

In some lighter news throughout the interview, Prince Harry and Markle announced they are expecting a baby girl this summer! The Royal family has also just released a statement about the recent interview stating, “The whole family is saddened to learn the full extent of how challenging the last few years have been for Harry and Meghan. While some recollections may vary, they are taken very seriously and will be addressed by the family privately. Harry, Meghan and Archie will always be much loved family members.”