156 years in the making: Juneteenth established as federal holiday 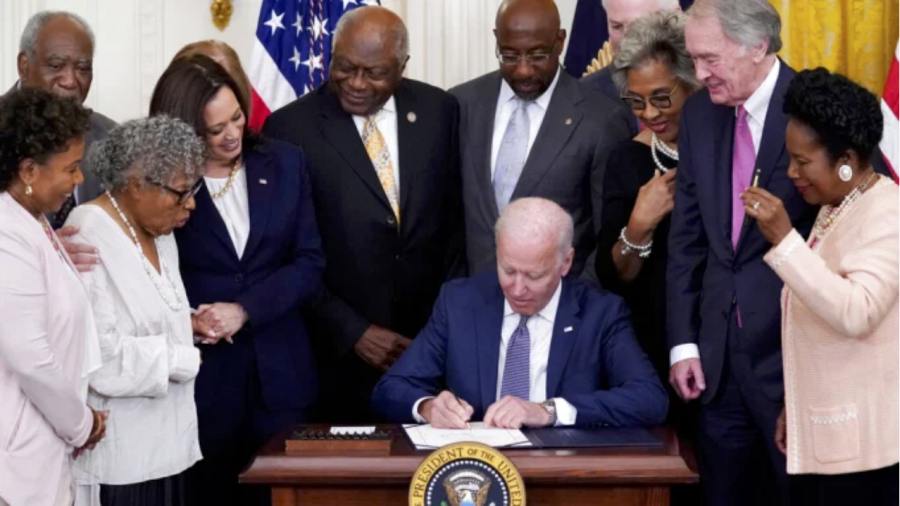 In a white house ceremony, Biden said the holiday should be right beside the others in celebrating our independence and the laborers who built this country.

“That’s what we must understand that Juneteenth represents not only a commemoration of the end of slavery in America more than 150 years ago, but the ongoing work to have to bring true equity in racial justice into American society, which we can do,” Biden said.

As many Americans take the day off for the newest federal holiday, Vice President Kamala Harris wants everyone to be clear about the history that took place on June 19, 1865.

Juneteenth commemorates the day Union Gen. Gordon Granger arrived in Galveston, Texas to inform the slaves that the civil war had ended, as well as slavery. The Emancipation Proclamation was signed by Abraham Lincoln on January 1, 1863, but was not administered in Galveston until Granger spoke it out loud.

Though Juneteenth is being celebrated as a national holiday for the first time, the day has been commemorated for decades. Texas became the first state to declare the day a legal state holiday in 1980.

Quinnipiac Assistant Professor of History, Dr. Christina Dickerson, says the federal commemoration is one way to bring awareness to this history.

“Making Juneteenth a part of our national calendar will raise awareness about the history of slavery in the United States and that is a positive step. That step alone will not change the inequities that persist in American society,” Dickerson said.

While the Emancipation Proclamation was a step in the right direction for African Americans, it was still not an easy road to walk. Dickerson feels it is critical for Americans to understand the aftermath of the emancipation.

“For many years after 1865, brutal and systemic forces made true freedom nearly impossible to obtain. Particularly in the late nineteenth and early twentieth centuries, Black people faced horrifying violence not only in the south but in the north and the west as well. The 1921 Tulsa Race Massacre is only one of many examples of such violence. Black people also faced economic and political disenfranchisement,” Dickerson said.

As Biden ended his remarks before sitting down to sign the Juneteenth National Independence Day Act he said, “I have to say to you, I’ve only been president for several months, but I think this will go down, for me, as one of the greatest honors I will have as president.”

To learn more about Juneteenth, visit the National Museum of African American History and Culture website.