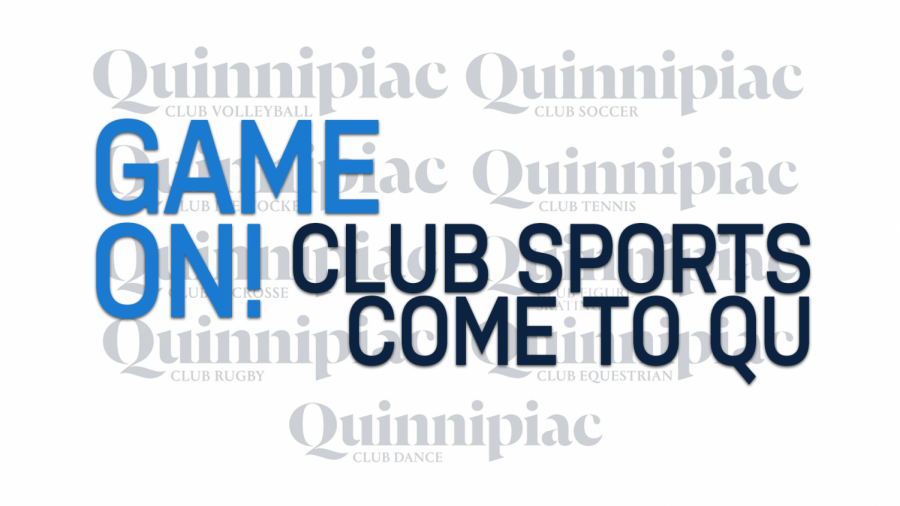 Associate Director for Intramurals Michael Medina announced the first roll out of club sports teams for the Fall 2019 semester today, filling one of the largest athletic voids that existed among the student body.

Club sports was always a hot button topic at the Student Government Association’s (SGA) State of the QUnion and one of the most well-known SGA initiatives.

“There’s so much excitement right now on campus with this new initiative”, Medina said.

He is excited for the students who are now able to have a new way to exercise their athletic abilities that hasn’t been available before.

Q30 Television’s News Director, Cali Kees, asked Medina if the recognition of the women’s equestrian team had anything to do with earlier rumors that there would be an equestrian center on campus.

Hamden, North Haven and Southington were the towns Medina mentioned as being potential locations for horse stable partnerships.

Kees asked Medina about the women’s figure skating club sports team and Medina said the decision was made after looking through statistics from open figure skating nights that were held.

“We know that the competitions are out there, the northeast is kind of a great focal point for figure skating along with the upper midwest, so there’s a great opportunity for this sport to take off.”

The International Skating Center of Connecticut is located just under an hour away from the Mount Carmel Campus, in Simsbury, Connecticut.

Medina has been in charge of overseeing Quinnipiac’s intramural athletics since 2011 and believes that club sports will provide a better middle ground between Division I athletics and intramurals.

“One area of intramurals that we’ve seen are those really good high school athletes that come in and intramurals just isn’t competitive enough for them,” Medina said.

The club sports teams will also have student leadership positions, like a president, vice president and treasurer position, as well as a club sports governing council.

Medina has led the behind-the-scenes conversation to make today become a reality, a conversation that has taken a considerable amount of time.

“I think everything we’ve done these last five weeks to get this ready has been at warp speed,” Medina said.

The conversation was propelled by members of a committee who provided feedback as to what club sports should be pushed forward in the first roll out.

“We definitely had a blend of both recreation and student affairs professionals who helped us kind of look at what the organizations would look like, and then we had three students on the total committee of seven,” Medina said.

Interested students were asked for a tentative team roster, the facilities that they would need, a budget that they had in mind and who they would be playing against.

“We saw, particularly in New England, there’s so many club sports programs at all different levels of universities and colleges in the area that there’s a really deep pool regionally for these teams that we’ve accepted,” Medina said.

The funding for all ten approved teams will be equitable across the board to start up and each team can spend the money how they choose, working with the full-time administrative staff overseeing club sports to make sure they remain revenue neutral.

Student dues will supplement any further costs for each sport.

“We don’t have budget numbers yet for the 19-20 year, I can’t give that exact dollar amount,” Medina said.

He explained that the facilities on campus will be used but teams will still need to explore off campus options. This is because the size of the fields may not be in accordance with the parameters set by the national governing bodies for each sport.

Naming of the teams and their uniforms are two things that Medina is currently working on. The only this he is certain of is that the team uniforms will have the Quinnipiac name “front and center.”

Although only ten of the 21 teams who applied were recognized for Fall 2019, the committee gave equal and fair consideration to all who applied.

“The professionalism that we all handled ourselves in the room of giving every team an equal, a fair chance of being a club sport, I have to take my hat off to everybody on the committee who helped me along with this process,” he said.

There will be an application process for potential additional club sports every spring semester.

Medina said, “I think the university realizes this is an initial investment and that there’s going to be potentially more club sports teams that come around in future years.”