Brooksvale Park held its annual Maple Sugar Festival, where all the sap collected from February to March is sold to Hamden residents in the form of maple syrup. 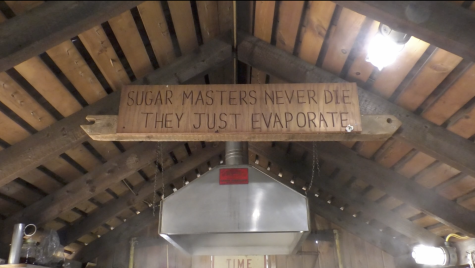 “When we are bottling syrup, which we will hopefully be doing in a week and a half, that’s another very exciting day when all of the hard work pays off and we’re bottling that syrup knowing people are going to enjoy it,” Lavorgna said.

The tiny shed called the Sugar Shack is where the process of taking the collected maple sugar and putting it into the cooking chamber, fueled by burning wood, to cook for 10 hours before it is maple syrup. Two percent of the water poured into the reservoir pan is pure sugar, with the rest being water.

While the process is simple and uneventful, only 54 gallons of sap generate one gallon of maple syrup. This calls for a lot of long hours in the Sugar Shack and a lot of tree tapping.

Sugarmaker Pete Laffin says the hardest part of the process is waiting. Many times the Sugar Shack does not acquire as much sap as hoped.

“Seven gallons for me is a good year,” Laffin said. “Last year we did 15 gallons, which was an exceptional year. I think we are going to hit seven this year.”

“You need a winter to have a maple syrup season. Unfortunately in Connecticut, our winters are disappearing,” the Sugar Shack’s sugarmaker Pete Laffin said. “I really believe that within 20 years there won’t be much maple syruping in southern Connecticut.”

The weeks for maple sugaring tapping have been becoming shorter and shorter each year. Laffin says tapping used to begin in the middle of January, but this year began in the last week in February and will go to mid-March.

“It will be one of those things of the past,” Laffin said. “I think it will continue up in Vermont and Canada. There is a study showing that their season is shortening already by three days a year. It just adds up over a 20 year period.”

The Sugar Shack saw a great winter this February and was fortunately able to gather a ton of sap. While many maple sugar shacks around Connecticut slowly begin to stop operation with the effects from climate change, Laffin hopes to see a few more seasons of tapping in the future.