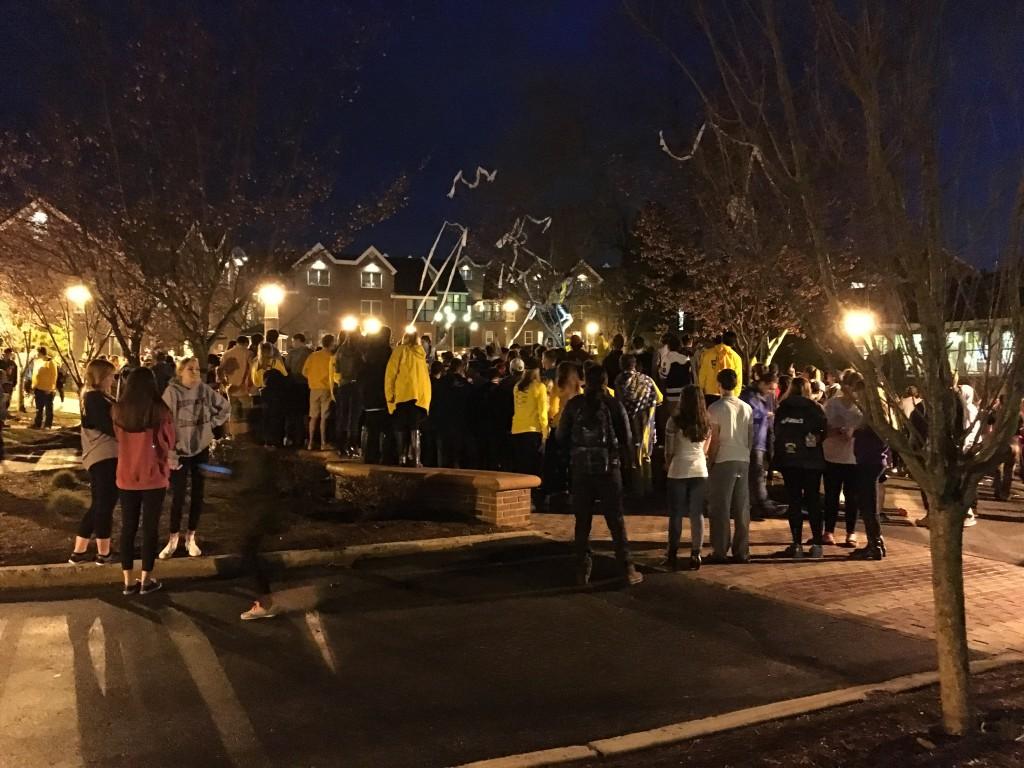 By Jenelle Cadigan and Nicole Kessler

At the final buzzer, students on main campus flooded Bobcat Way from all directions. Their cheers grew louder as more and more Bobcats joined in on the celebrations. Anticipating the situation, Quinnipiac Public Safety officers and Hamden Police Department officers were already stationed on the sidewalks when the crowds came running.

Confetti canons blasted in the air and students covered trees in toilet paper. But celebrations quickly got out of hand when those same trees were torn apart to start a bonfire.

Public safety officers continued to stand back and told us their orders were to step in when something dangerous happened.

“This is a little bit too much,” said Caroline Sullivan, a freshman at Quinnipiac. “They’re destroying school property. They lit a tree on fire. It’s getting kind of dangerous for not winning a championship.”

About thirty minutes after the game had ended, a student who had climbed his way up a tree began violently shaking the tree until it snapped in half, crashing down in front of the bobcat statue.

“The chanting and the yelling and, you know, the camaraderie… that’s always good,” said Lily Herman, a sophomore. “But when you start breaking stuff and lighting stuff on fire, I don’t think that was necessary.”

The crowd was roaring but the chaos was soon shut down when public safety and Hamden P.D. stepped in.

“The campus was unified for one night and this was tonight and we broke a tree,” said sophomore Chuck Driscoll.

The student who broke that tree was taken away in handcuffs.

The crowds have dispersed for now, but come this Saturday the Bobcats face North Dakota in Tampa, Florida at 8 p.m. for the championship title.