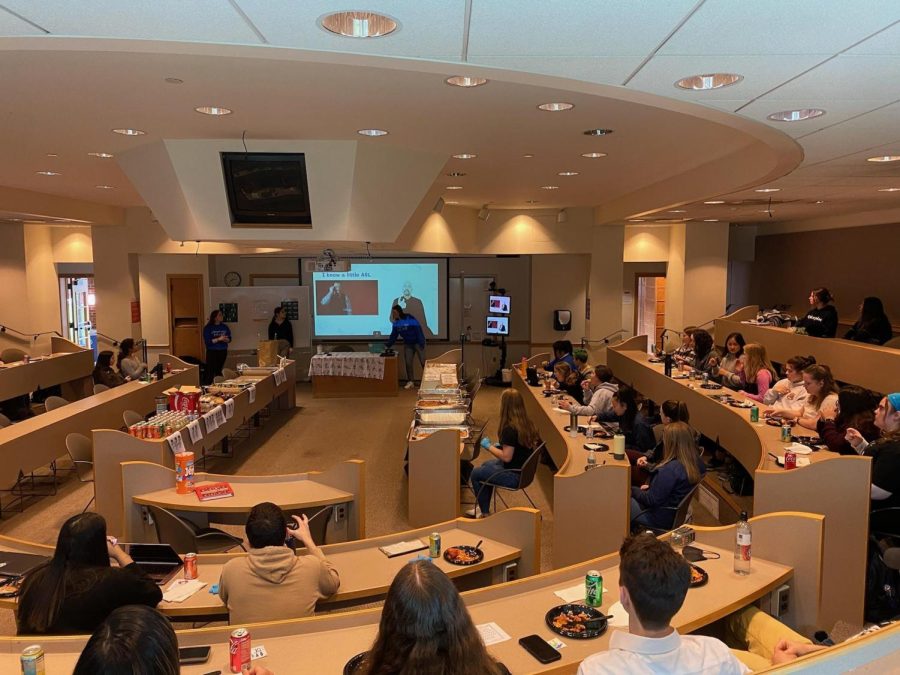 Between the Quinnipiac University American Sign Language (ASL) club and new courses being added to the schedule, ASL has had an increase of attention on campus.

The ASL Club holds meetings every week on campus and puts on events for students. President Katie McIsaac has been part of the organization for her four years at Quinnipiac and has risen from Secretary to Vice President to President.

“We hold weekly meetings where we teach attendees different signs so we’ll teach sign language, we’ll do different themes like clothing theme, food, color signs, and play games and we also promote and teach about deaf culture and we do different events like paint night and movie night like our most recent event, Sign and Dine,” McIsaac said.

The event, Sign and Dine, was held on Friday, April 1 by the Student Government Organization and ASL Club. The organizations served food to guests and taught them basic signing skills. There was also a presenter from the American School for the Deaf and trivia. The goal of the event was to show the Quinnipiac community about ASL and to show them that they can use it in their daily lives.

“I think it opened a lot of peoples eyes to sign language, about deaf culture, and we were able to have fun while doing that,” McIsaac said.

It was also announced that ASL classes would be offered over the summer 2022 semesters. These classes are to be held in a web-based style with Zoom sessions three days a week.

Chair of the Department of Modern Languages Aileen Dever says students presented her with the idea for these classes. Dever and her team did research and decided to add these courses to the university curriculum.

“I found out that ASL, American Sign Language, has a culture, it has grammar, it has syntax, it has vocabulary, there’s poetry, there’s theater… and it absolutely belongs in our own panoply of languages that we’re offering,” Dever said.

According to Dever, the class will also be taught by a deaf professor.

Current Vice President of ASL Club Gabrielle Mushinski hopes to continue the success of the organization.

“I think we are starting to get bigger on campus and I hope in the future that we can have more events and collaborate with other organizations to promote deaf culture and show people how important knowing just a little bit of sign is,” Mushinski said.