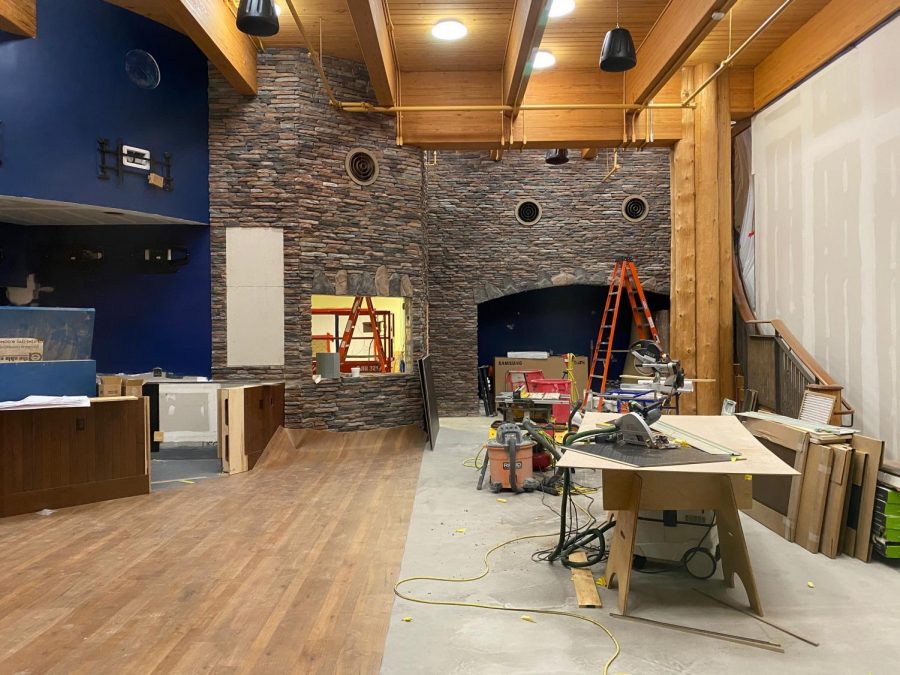 Last spring, Quinnipiac University President Judy Olian announced that renovations would be made to the Rocky Top Student Center on the York Hill campus that included the installation of a pub. For a long time, the Quinnipiac community wondered when the pub, which students voted to be named, “On the Rocks,” would actually open and what it would include.

At this year’s State of the QUnion, some of those questions were answered by various administrators, including a target for the opening date.

“We’re targeting the Yale game as the grand opening for it,” Vice President for Facilities and Capital Planning Sal Filardi said. “The bartop is going in right now. The floor is being finished up. It’s very near completion.”

“It’s going to be a great venue,” Filardi said in an interview with Q30 after the event. “Not just an alcohol pub, but a place for nonalcoholic programming could happen too.”

Chartwells will be responsible for the food operations at the pub. The official menu has not been released yet; however, some students believed the menu was released on Wednesday when Chartwells’ parent company, Compass Group, was testing the Boost application for an additional menu location. Filardi said that mobile ordering will be available and the menu will have pub-style food.

“We have a company that we’ve worked with before that does the bartending,” Filardi said. “They’ve done senior night and stuff in the past. They’re going to be the vendor who does that.”

Filardi says he likes the idea of theme nights like a trivia night which he says is very popular in local bars in Hamden.

Prior to the State of the QUnion, Vice President and Dean of Students Monique Drucker also spoke to Q30 about the pub.

Drucker said that the space is meant to be an area for all students to enjoy.

“We will have 21 and over nights because it’s a pub,” Drucker said. “But, we’re also really excited to try different things up there as well.”

Assistant Dean of Student Affairs for Campus Life Matt Kurz told Q30 in an interview in November 2019 that the space will be open for students at all times of the day. For example, someone could sit in the pub to eat breakfast if they wanted to.

“It’s going to have a bunch of TVs so maybe it could have news on or some kind of show on,” Kurz said. “It’s going to be a space that can be used for a lot of things.”

Kurz said that it may be used for other types of catering as well.

“I think there’s potential for it in the future to have a juice bar, so people that are working out could maybe get a protein shake potentially, you could have coffee in there,” Kurz said. “We’re still kind of working out the details.”

The space will also be available for students to reserve and meet with organizations to have events. If students wanted to play pool or shuffleboard, they will also be able to do it there.

“There will be pub nights or bar nights where we will have, ideally, multiple nights a week where there is alcohol served,” Kurz said. “Some of them will hopefully be themed. We’ll look into potentially having trivia nights or other things.”

Kurz said the goal is to serve alcohol three nights a week and have other consistent weekly events too.

Beer and wine will be served at the pub.

“We’ll do hopefully some standard, we’ll have a couple domestics, people really like craft, have a lot of local craft beers and do kind of features and highlights and do that kind of thing with wine of course,” Kurz said. “We want to have it be a place where students want to go.”

According to Kurz, besides the vender and Chartwells, the pub will likely be staffed with a Quinnipiac employee that oversees it, graduate staff and student workers.

Quinnipiac is currently searching for a new associate director of campus life. On Jan. 23, a posting for the position was made to the career opportunities section of the QU.edu site. The posting, which appears on Quinnipiac’s employment opportunities page, mentions “bar space responsibilities” and “demonstrated operational or programmatic experience with a pub/bar in a higher education environment”.

“We really want it to be great,” Kurz said. “It’s going to be an exciting space. It’s going to look awesome and be a good space to be in.”

Stay with Q30 News as we approach the target opening date.