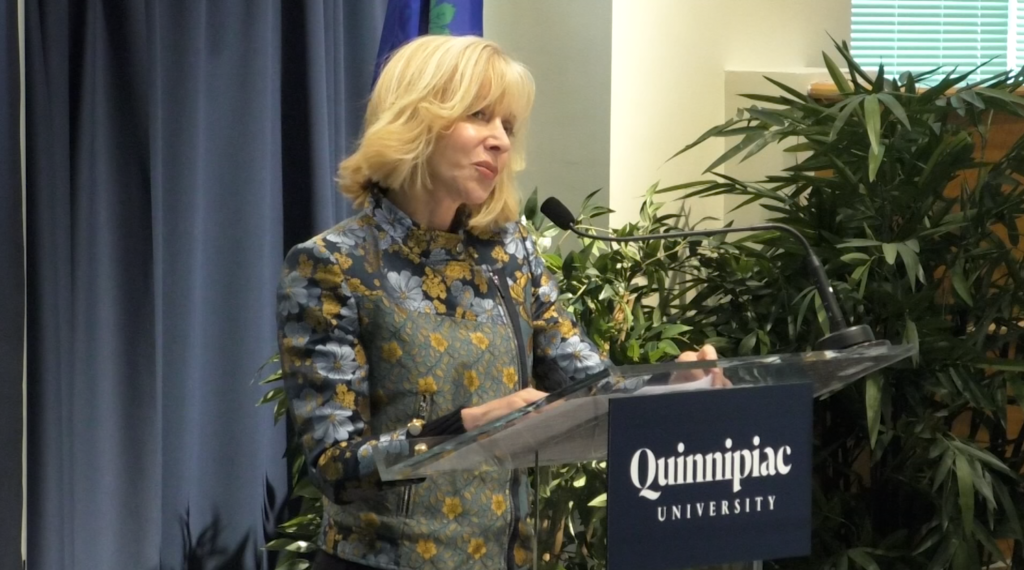 After almost a yearlong search, Quinnipiac students, faculty, staff and Hamden residents filled the Mount Carmel Auditorium this Monday to hear who would become Quinnipiac’s next president.

“I am very excited to be joining you in building this next phase of a very special university,” Olian said in her opening remarks.

Olian has served as both the dean and John E. Anderson Chair at the UCLA Anderson School of Management since 2006.  She has also previously served as dean and professor of management at the Penn State University, Smeal College of Business Administration as well as, professor and senior associate dean at the Smith School of Business at the University of Maryland.  Under Olian’s leadership, UCLA Anderson has been ranked among many of the top business schools in the world.

A born-and-raised Australian, Olian spent her childhood traveling between Australia and Israel.  She earned her bachelor’s degree in psychology from Hebrew University in Jerusalem and later went on to earn her master’s as well as a doctorate in industrial relations at the University of Wisconsin, Madison.

The announcement on Monday was made by Board of Trustees Chairman William Weldon (Class of ’71) following the board’s vote that morning.

“Quinnipiac sought a visionary leader energized by the opportunity of leading our university at a pivotal moment in its history. That leader is Judy Olian,” Weldon said.  “We are confident she will build on the university’s current momentum and strong foundation and will lead Quinnipiac to further impact and national recognition.”

The search for Quinnipiac’s ninth University President began shortly after President Lahey announced his plans to retire after thirty-one years as President last April.  The beginning staged of the search included input from all constituencies, including trustees, faculty, staff, alumni and students.  After a 14-member advisory committee chosen to widely represent the university community was established.  The advisory board then reviewed candidates, interviewed the finalists and assisted the search committee in their deliberations.

Immediately following Olian’s first speech as president-elect, questions were allowed from members of the audience.  Students voiced a wide variety of questions about university advancement, accessibility of the president-elect, division students see on campus and many more.  Hamden Mayor Curt Leng was also in attendance to welcome Olian to both the town of Hamden and the university.

“I just wanted to on behalf of the town…to congratulate you, to welcome you and to say that I very much look forward to working with you in the future,” Leng said.

Not only is Olian ready to work with the Hamden community but she also expressed that she is ready to continue to make Quinnipiac a more inclusive campus for all.  Being the first woman president Quinnipiac has had, Olian received many questions regarding how she felt about being the newest woman in power at the university.

“I am a person who is a strong proponent of gender advancement,” Olian explained.

She went on to say that she hoped that her presence at Quinnipiac as university president encourages other girls to follow in her footsteps.

Based on the press conference and welcome event, many students and faculty expressed that they see a new era on the horizon for Quinnipiac University.

Junior Joe Iasso said that he thinks he is ready for the change that he sees Olian bringing to the university.

“I am always weary at first but usually I come to accept it and I think that I am already starting to accept it.  I’m really excited for that new energy she’s going to bring here and hopefully bring us back together as a community after we’ve become so divided, in my opinion,” Iasso said.

Kenn Venit, a part-time Quinnipiac faculty member, thought it would be really tough for the search committee to find anyone to follow John Lahey after 31 years but he now believes that the right candidate was chosen.

“Quinnipiac is in for a new era,” Venit said.