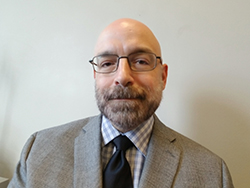 Some of Sykes’ biggest accomplishments from Emerson are maintaining the college’s enrollment models to have a wide range of data which included admission, financial aid information and enrollment. His work helped Emerson increase the geographic diversity of first-year undergraduate classes. He also expanded the number of online graduate programs, which increased by 20% in enrollment, and he effectively increased the number of underrepresented minority students at Emerson.

Prior to his work at Emerson, Sykes worked in institutional research at Emerson and Xavier University. He was also an assistant professor of psychology at Dickinson College where he headed 20 research projects and taught a variety of courses.

Sykes has a master’s in social and personality psychology with a concentration in psychometrics from Purdue University. He also holds a bachelor of science in psychology and a minor in mathematics from Loyola University Chicago.

Students, faculty and staff were made aware of the hiring via email on Aug. 23, 2019, from Interim Executive and Provost Jennifer Brown.