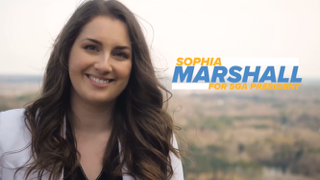 Sophia Marshall, class of 2021, was elected to the position of Student Government Association president on Tuesday, April 21 in the 2020-2021 SGA executive board election.

“I’m blown away by the support that I’ve gotten not only this year, but just the past three, so it’s crazy,” Marshall said.

Marshall ran unopposed for this position receiving a total of 1,217 votes, or 94.26%. 74 students or 5.73% of the voters chose to abstain from their votes for the president role.

“I think I’m acknowledging that [running unopposed] a lot and kind of taking that as motivation to be the best president that I can be this upcoming year because I need to be, because the student body didn’t have another option,” Marshall said.

However, this is the first time that SGA has seen a woman president in over 15 years. Melissa Dudra, class of 2004, was the last female to hold the position of SGA president.

“Being the first female president in over 15 years is definitely an amazing feeling,” Marshall said. “But, while it is a cool statistic, I don’t want it to be what defines my presidency. What I want to define this term is the hard work and great things that not only this executive board is going to accomplish, but our senate as a whole. With that being said, I definitely don’t take this honor for granted, and I hope to do it justice.”

“Set three goals for that committee right off the bat, and then obviously, that could change,” Marshall said. “That’s not 100% set in stone because at the end of day, steering committee is supposed to function for the students, and if there’s something super pressing, we’re going to address it. I wanted to really sort of set those goals. So we’re 100% productive. We’re always doing stuff.”

Marshall also hopes the steering committee will work to continue improving Quinnipiac’s relationship with the town of Hamden.

Marshall plans for the committee to create an event that she is calling, “Bobcat Day.” This would be an all day event on a Friday in the spring where classes would be canceled and students would be encouraged to come together.

“President Olian would cancel classes,” Marshall said. “It would be this big day for all the Quinnipiac students to come together. We hike the giant in the morning, have breakfast up there served by the faculty, and then we come down. It would be a really cool day of tradition that would happen every single spring. That steering committee would serve as sort of the group of people that gets different student organizations to buy into that once it’s approved hopefully and get different presentations and performances from different organizations, so that it’s really a day of community.”

Marshall also plans to create a committee that consists of large student leaders from a variety of different organizations and herself to meet a couple of times during the semester to discuss issues that their groups may be having and hold each other accountable.

Accountability within SGA is something that Marshall wants to take seriously following issues in the past with roles not being done to the fullest.

“Setting the tone early and just having that for sure model, if this is what happens, and you’re not serving the students to the best of your ability, then we’re going to have consequences to that, because at the end of the day, we are elected by the student body, and we need to act like it,” Marshall said. “I plan on doing for sure weekly check ins to make sure that people are actually doing the work that they’re saying they’re doing so that nothing slips through the cracks.”

Although they will be done virtually, Marshall has a lot of plans for her first 100 days as president, which includes meeting with the executive board to set the tone for the year. She will be working to make sure that they’re each ready to fulfill their duties and lead their committees come the fall.

Marshall also hopes to create the leadership committee with leaders of other organizations right away, so SGA can begin working with them over the summer and get an understanding of what they can do to assist. She wants to make sure that each organization is prepared for the involvement fair.

Marshall also wants a plan to be set for class cabinet elections in the fall.

“I think just just looking towards the fall, making sure my team is ready, having that accountability plan ready to go,” Marshall said. “Writing up a contract for elections to make sure that everyone’s on board when they’re running and they sort of know what they’re signing up for and so that when we get back in the fall, we can just pick up right away, have those trainings in place and all that stuff.”

Marshall sees uncertainty as her biggest challenge at the moment.

“Nobody knows right now about any of this stuff, and it’s definitely a scary time and something that we need to take very seriously,” Marshall said. “That’s obviously going to be the priority, the safety of the students at Quinnipiac.”

She said that not knowing when orientation may be held, not knowing what budgeting may look like in the fall or if students will definitely be allowed to return to campus are all concerns of hers.

“I think that is going to be the biggest thing I see getting in the way of the success of our new board for the summer, especially just because administration is dealing with so many things right now,” Marshall said. “But, I think we have a really strong team. We have really good communication skills, and we have really good relationships with those administrators, so I think we just have to figure everything out together.”

In a year, Marshall would like to see the student body invested in spirit and tradition at Quinnipiac, as well as SGA working productively to efficiently serve the students.

“I think I would love to see a campus more invested in Quinnipiac and what it has to offer, because it’s really, really an amazing place, as anybody who gets involved knows,” Marshall said. “I think just the biggest focuses are going to be those new traditions and getting people involved.”

Marshall wants Quinnipiac students to know that she is there to serve them and is always open to new ideas.