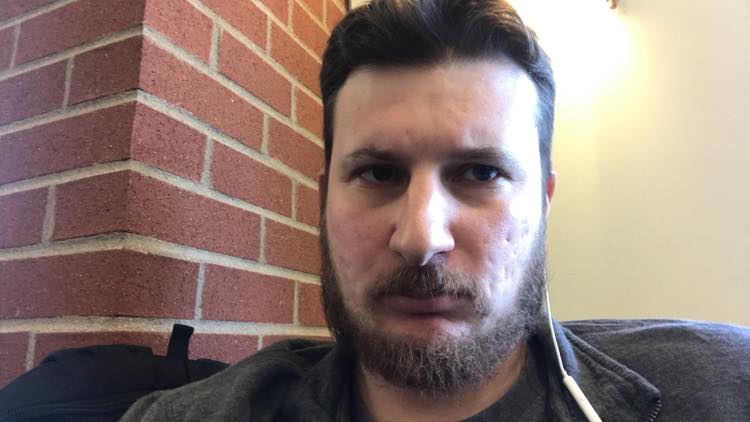 Quinnipiac University public safety responded to a report of a suspicious man who came onto campus to get students to try “bang energy powder” on Tuesday.

The man, identified as Matthew Allen of New Haven, was sitting in the lower cafeteria in the Carl Hansen Student Center around 3:30 p.m.

Allen posted on Facebook: “If anyone at Quinnipiac University wants to try bang energy powder for free I’m here waiting in the dining hall while everyone ignores me except the coeds in their skintight yoga pants who keep eyef*cking me. I’m not actually looking for sex but I am looking to make money off a high quality product I invested in. I’m charging Yale students $80/bag not everyone, fwiw (for what it’s worth).”

Many students say they saw him snorting several lines of white powder.

“He was just coming up to different people, and he was offering them different substances and stuff,” Zack Mykytiw said.

He offered the energy powder to freshmen students, Mariam Shawish and Zack Mykytiw, who were sitting next to him.

“He was like do you want this coffee, adderall or some other different drugs,” Mykytiw said.

That was when Mykytiw decided to call Public Safety to inform them about this situation.

“Public Safety came right away because apparently they had already gotten like four or five different calls from other people,” Shawish said.

Mykytiw and Shawish both said that when the public safety officers got to the scene, they searched Allen’s bag and questioned how he got onto campus and why he was here. They also opened Allen’s bang energy powder bottle, and they pulled out several Ziploc bags of white powder from it, according to students.

“He said that he wasn’t a Quinnipiac student, when they asked for I.D.,” Shawish said. “I think that he admitted he just walked on campus.”

Shawish overheard Allen telling officers that this was not the first time he has gotten in trouble for something like this.

“He said that at his own college he did get in trouble for this before,” Shawish said. “He has gotten in trouble for soliciting at other colleges before, and he said he has been arrested for trespassing and harassment before.”

Allen posted on his Facebook that he was given a “promise to appear” court document on April 14 for charges for criminal trespassing in the first degree at another location and possession of a controlled substance . His court appearance is scheduled for April 23 at the State of Connecticut Superior Court.

The fact that Allen was able to get onto campus and into the Carl Hansen Student Center is what concerns many students.

While there are public safety officers stationed at gates where cars enter into Quinnipiac’s parking lots, Mykytiw acknowledges how many open spaces there are where anyone can just walk onto the campus.

“I feel like the accessibility from people walking on the campus maybe needs to be reevaluated,” Mykytiw said. “I know they’re very strict at the gates with cars and stuff like that, but I feel like people could just walk on campus and do something like that again.”

Tuesday was not the first time that Quinnipiac’s Mount Carmel Campus had a security breach. This past November Sean Brozek, an Uber driver, followed a Quinnipiac freshman to her residence hall.

Brozek was later charged with stalking, threatening and criminal trespassing.

Hours before Allen came onto Quinnipiac’s campus, he commented on one of his Facebook posts from earlier Tuesday morning.

“Getting banged up before heading to Quinnipiac College to “pitch” and con gullible coeds into sleeping with me,” the post reads.

The video attached shows a bible, a credit card and two lines of white powder. He documents himself snorting the white powder.

Q30 News reached out to the university for a comment about this situation.

“Public Safety responded promptly to a report of an unauthorized male visitor in the Mount Carmel Dining Hall on Tuesday afternoon,” Lynn Bushnell, vice president for public affairs, said. “After speaking with the man, the officers decided to detain him until the Hamden Police arrived and escorted him off campus.”

The situation is now being handled by the Hamden Police Department. Q30 News reached out to Hamden PD for a comment, but they have yet to get back to us.

It is unclear at this time whether what Allen was snorting and attempting to get students to try was bang energy powder or something else.

Stay with Q30 News for more on this story.