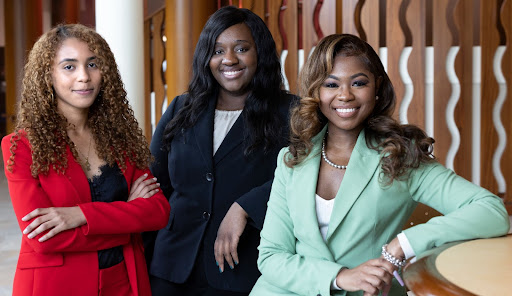 Nataly Brown will serve as treasurer and Fontaine Chambers will serve as vice chair for NEBLSA. The organization aims to increase diversity within the legal field by fostering community and support specifically for Black students who hope to enter it. Just 5% of attorneys in the US are black, making the profession one of the least diverse.

“The legal profession is still not as diverse, so a lot of what we do is we ensure there is that professional development component,” Chambers said.

The organization was created to provide guidance both academically and professionally, with the ultimate goal of producing a “holistic lawyer,” according to Chambers.

“NEBLSA is just there to give the extra support, to help people of color go through certain doors to be able to reach their goals and be in the legal field,” Brown said.

With law being a predominantly white field, NEBLSA also can act as a safe haven for Black students as they pursue legal studies. At Quinnipiac, students of color only represent 24% of those attending the School of Law.

“Just being able to be that support system that people of color need because most law schools are predominantly white unless you go to a historically Black school, so sometimes people don’t feel like they can get the support they need at the school when they’re not around a lot of people who are like them,” Brown said. “So we’re that support system, they can get the support and we will understand certain feelings that [they] have.”

NEBLSA encompasses the northeast and includes law schools like Cornell, Harvard, New York University and Yale. Having Quinnipiac students on the executive board highlights the university and gives students a chance to have a voice within the organization, acc.

Justice Ketanji Brown Jackson attended Harvard University for both her undergraduate and law studies, graduating in 1996 with a Juris Doctor. From there, Jackson held various clerkships from the Massachusetts District Court to the Supreme Court under Justice Stephen Breyer. She was nominated by former President Barack Obama to the U.S. District Court for the District of Columbia. Just this year, she was nominated by President Joe Biden to the Supreme Court.

“It’s important for representational value for role models, to encourage people to see that they can achieve these kinds of offices, even if the majority doesn’t look like them,” Robinson said. “But it’s also important because it can reaffirm Americans’ faith in the judicial system. It’s hard to have faith in the system that doesn’t seem to reflect you, your worldview, or your perspective.”

Throughout the 238 years of Supreme Court history, the United States is finally seeing the first Black female judge out of 116 previous justices. According to Robinson, while this achievement is monumental, it took a long time and a lot of effort for this achievement to happen.

“I think Judge Jackson’s nomination and appointment to the Supreme Court has a great deal to do with the fact that there has been sustained effort to increase diversity in the legal profession,” Robinson said. “And so there had to be this really long term sustained effort to reverse that trend, so I think it’s good that this has happened, but it also has highlighted the fact that there’s so much more that needs to be done.”

Robinson explained that attorneys have to decide early on in their career whether they plan to aim for the Supreme Court, attend the proper schools and land the best clerkships. She hopes that Justice Jackson’s appointment will increase visibility for Black attorneys and get them further along in the field.

For the law students, seeing representation and diversity on the Supreme Court through Justice Jackson’s confirmation was an important moment.

“Seeing Justice Ketanji Brown Jackson on the Supreme Court just showcases representation. Seeing someone like you in this role makes it more realistic that that goal is attainable,” Chambers said. “During her confirmation hearing she did indicate that her parents made the pathway clear for her, and she has made the pathway clear for individuals like myself. Although there may be some struggles I will face, it won’t be as hard or as challenging because she is the first.”

The students’ say the timing of this achievement so close to Justice Jackson’s confirmation makes it even more special.

“It is great, especially during a time where we do have our first Supreme Court justice who is a black woman,” Chambers said. “That just showcases black women and leadership roles, and that we are multifaceted, we’re very intelligent. And there’s just so much excellence that encompasses, so I think that it just is a great moment to be stepping into such a role, especially during the time of Justice Ketanji Brown Jackson.”

Brown says that this milestone is also inspiring more local courts to push for diversity, and that “good things are changing.”

“It kind of gives recognition, like this is reachable,” Brown said. “You can reach this milestone, she’s helping break that glass ceiling, and we always just need to see that.”

“The sky’s the limit – I don’t even know if sky’s the limit, you know we’re breaking barriers one at a time and there’s just so much more for us to do,” Chambers said. “This doesn’t end, there’s still more to do to diversify the legal profession.”

The students appreciate the ability to be a part of this movement and hope that they can be a source of inspiration for others as well.

“I’m so happy that I am serving on the Northeast Black Law Association, because I know I’m paving the way and making it clear for someone else,” Chambers said. “And that is something that I find is invaluable, and I’m so appreciative for that opportunity.”