What It Is Like Being A Female Leader at Quinnipiac 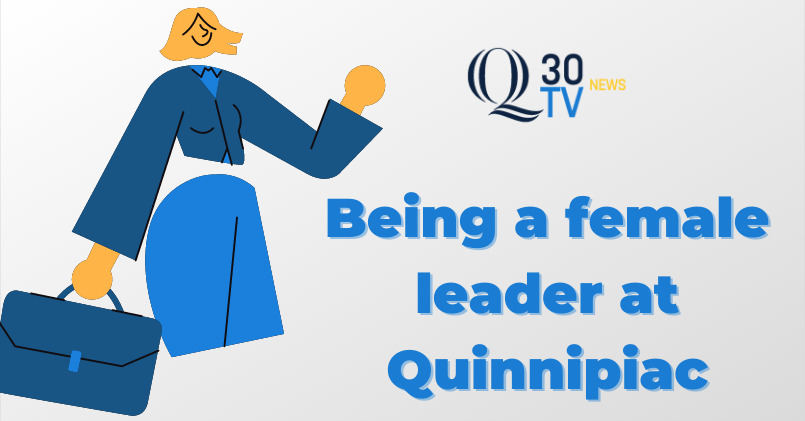 Many female student leaders at Quinnipiac understand what it’s like to be a woman in a leadership role in male-dominated fields and want people to know their passion and their voice is no less than a man’s voice.

“We have to stop sexualizing every single thing,” President of the Association of Women in Sports Media Quinnipiac Chapter, Kristen Anderson said. “We want to be in this profession and we want to use our voices and do what we love without any judgment.”

Students felt that in professional environments, women are demeaned more subtly. Most comments are offhanded and their male counterparts are often oblivious to their own insults.

“A lot of times, it’s microaggressions, and it’s just men thinking women like me are in it just to meet guys,” Anderson said. “In reality, we love the sport and it’s not because of the people on the team.”

While every profession has some amount of competition, women have to face the added pressure of male competition. According to the President of the Chapter of Leading Women of Tomorrow, Gabriella Colello, women have to work a lot harder to prove their point and a simple mistake can affect them a lot more than it would affect a man.

“A lot of the times, we’re expected to be able to, as women, call upon facts. To know our issue inside and out in ways that our male peers might not have to,” Colello said. “That if you can catch a female politician having a slip or maybe not knowing, it invalidates what they are saying so much more than it would than if that politician were a man.”

Not only that, when it comes to new opportunities, women often hold themselves back because they tend to downplay their own achievements. Men are more likely than women to apply for a promotion even if they lack the qualifications for the position.

Quinnipiac University’s President, Judy Olian, attributes this to the lack of confidence in women and added that this characteristic has held her back at times as well.

“Careers are built through what’s inside of you…for women, it’s by virtue of what they themselves hold themselves back from,” President Olian continued, “Let’s just take the example of having the opportunity to move from my previous institution on the West coast to here. It’s a major pivot. You go through all those decisions about whether you’re ready, whether this is the right thing for you, whether your life is ready to change in that way. Thankfully I ceased it. Thankfully, I’m here, But that could’ve been an obstacle I placed in front of me.”

Anderson thinks that this lack of confidence stems from stereotypes that surround work environments.

“I’m sure that most people mean well, but it’s these stigmas and everything that are destroying women’s mental health and all this because we feel like we’re not gonna be as well respected as a man in the industry; and that they’re [men] most likely to get a job because they’re a man,” Anderson mentioned.

While there is much that needs to change in the corporate world, Harris winning VP seems to be a start in the right direction for women across the nation.

When elected President, Joe Biden, selected Harris as his vice presidential candidate, there were a lot of racist and sexist comments circulating on the internet. Some called her too emotional, weak, and her qualifications were repeatedly questioned.

Student Government Association President, Sophia Marshall, believes that Harris’ confidence in face of all the hatred that she has received has strengthened a lot of women and helped them think for themselves.

“Women around the United States have picked up on those things and realized that that’s not necessarily okay and they’re taking it back into their lives, and using that as empowerment,” Marshall said.

For some students, this is a moment they’ve all been looking forward to.

“He [Joe Biden] was saying he was going to pick a woman, and I think there was an excitement about that because it’s not necessarily a man giving a woman this opportunity. He knew she was qualified. He knew she was the best choice,” Marshall mentioned.

President Olian felt that anyone in a position of power such as Harris was a role model to other women across the nation.

“Every person who provides you with a vision of who you could be and you can relate to that vision is a role model and encouraging. That’s why we want more representativeness, more people of color, more students of color, more faculty of color, more staff of color to be role models to others because they show the way. They show that you can be that person,” President Olian said.

All of the student leaders had advice for young women who wished to be future leaders.

“Don’t look at your gender, [or] your skin color as a barrier to success. Think of it as something that makes you stand out and use that to your advantage,” SGA’s Senior Class President, Olamide Gbotosho said.

President Olian had some encouraging words for female students at Quinnipiac who would graduate and go to work in jobs that are largely male-dominated.

“First and foremost piece of advice that goes without saying is to excel at what you’re doing. Never have any reason that people could say to you that you’re less than excellent and so that’s a minimum but insufficient requirement.”