Adjiza, Boyd look to contribute in 2020-21 with added responsibility 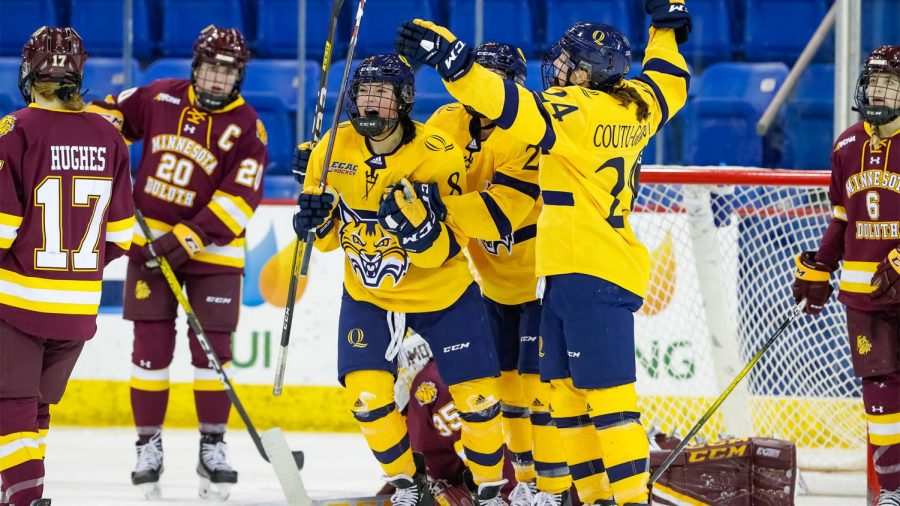 Adjiza led the Bobcats in assists and points last season, while Boyd ranked fifth in blocked shots and only recorded four penalties. Both seemed to flourish in their first two seasons with the Bobcats, but their junior season is up in the air due to the COVID-19 pandemic.

However, one thing that does not change with the pandemic is both Adjiza and Boyd will be juniors if and when the 2020-21 season gets underway.

The change from being an underclassman to an upperclassman comes with added responsibilities that these players will have to take on.

For Boyd, her job is a little harder. The loss of Abbie Ives is certainly not something to be overlooked. With a .924 save percentage and 1.85 goals against average, Ives provided a sense of comfort for the Bobcats. Now that Ives is gone, Boyd will look to lead a young defensive group going into the season.

Adjiza is a little better off as she has a lot of players returning to the offensive unit, but there was the notable loss of Sarah-Eve Coutu-Godbout, who led the Bobcats in goals and power play goals. Adjiza should look to fill that role as she did see some time on the power play unit last year.

Adjiza’s performance this season just might correlate to how well the Bobcats do this season. After scoring 11 times for the Bobcats last year, she will likely need at least 20 goals this season for Quinnipiac to make a deep playoff run.

As we saw this season, Coutu-Godbout was the leading goal scorer for the Bobcats with 16 and they only made it to the first round of the playoffs. For Quinnipiac to get to the championship, Adjiza will have to be the most reliable player on the team.

Boyd must also worry about the power play as they lost Kati Tabin, who was the quarterback of the unit with her distribution skills and heads up play making.

Now with Tabin gone, her spot on the top power play is looking to be filled. Boyd is a clear choice for the position based on her experience, but she does lack the offensive stats to be the undeniable number one option.

Kate Reilly, a rising sophomore, could be a potential fit for the Bobcats on the top power play unit. She did have two goals on the power play in her first year with the Bobcats and looks to continue what she started.

Reilly does seem to be a better fit on the power play unit since she scored three more goals than Boyd last season and had five more points then her. The Bobcats could give the position to Reilly instead of Boyd simply because Reilly is the better offensive play-maker.

Overall, there is one big takeaway here. Both Adjiza and Boyd, now more than halfway through their college careers, will have to step up and take more responsibility if the team wants to succeed this year.