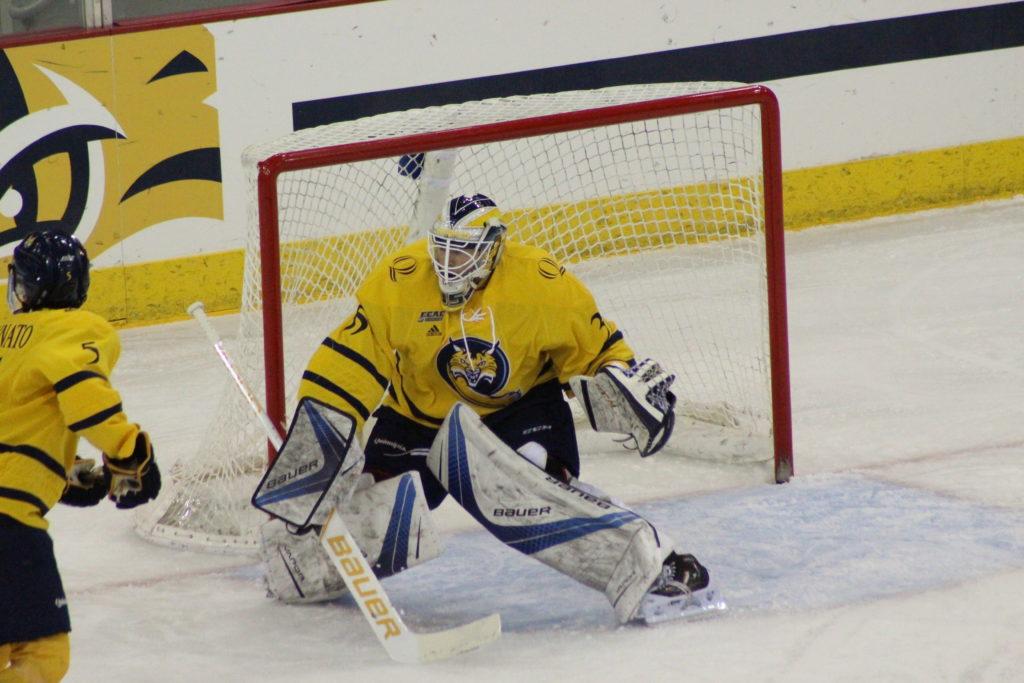 With Quinnipiac leading 1-0 halfway through the 3rd period, Friday’s game in Hamden between Quinnipiac and Yale shifted its focus.

The story of the game changed from Yale’s netminder, Sam Tucker, to Quinnipiac goalie Andrew Shortridge, and the Bobcats’ penalty kill.

With 12:40 to go in regulation, Tanner Macmaster committed a slew-footing penalty behind the play, resulting in a five minute major and game misconduct.

The Bobcats held strong while a man down, blocking three shots (two from Chase Priskie and one from John Furgele) and only allowing one shot on net.

Thomas Aldworth makes it a 3-0 game with his 1st goal of the season. That should do it as QU leads by three w/ 4 mins to play #ECACHockey

With the win, the Bobcats extended their undefeated streak to 10 games against Yale dating back to the 2012-13 national championship.

The win completes a much needed weekend sweep for Quinnipiac, giving the Bobcats four points in the ECAC, rising them out of the conference cellar.

“We’re getting back to playing Quinnipiac hockey,” Shortridge said. “We’re a very confident bunch right now. That’s what we needed to turn this season around, and we can feel that this is going to be the season to make an impact.”

The Bobcats can clearly feel confident after Shortridge’s play this weekend.

After defeating Yale at home in his freshman campaign a season ago, the sophomore was dominant in net Friday and Saturday night, recording his second and third career shutouts. The weekend sweep marks the first time a Quinnipiac goalie has had back to back shutouts since Michael Garteig turned away every shot against Brown and Yale on Dec. 4-5, 2015. That weekend was part of Garteig’s program record of 209 minutes and 21 seconds of shutout play.

“(Shortridge) has been great,” Quinnipiac head coach Rand Pecknold said. “He kind of locked it in this week, and I think we saw what we saw the second half of last year. He was confident, read the puck well, and had good depth.” 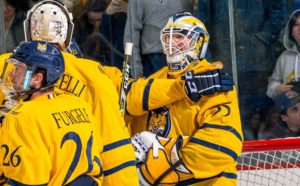 On the other side, Yale’s head coach Keith Allain was not pleased with his Bulldogs’ power play.

“(Quinnipiac) was blocking a lot of shots, but our power play hasn’t been good all year and it wasn’t good again,” Allain said. “The only thing I liked about our game was Sam (Tucker) and our penalty kill.”

Tucker and the Yale penalty kill kept Yale afloat the majority of the game. The junior goaltender saved 40 of 43 shots including a penalty shot against MacMaster.  Yale’s penalty kill was a perfect 7-7, but goals by Craig Martin and Thomas Aldworth late in the 3rd period sealed the deal for Quinnipiac.

“We needed it,” Pecknold said. “We’re not used to losing games at home or anywhere. It was a good weekend for us. I’m happy for the boys and hopefully we can build off this.”

The difference this weekend? The Bobcats’ captain says it comes down to accountability.

The Bobcats improve to 5-5-1 overall and 2-4 in conference play. Next up for Quinnipiac is an out of conference home and home weekend against the University of Massachusetts. 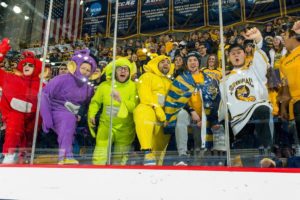 If you missed the Yale Game

In recent years, Quinnipiac has played Yale at home in the last weekend of regular season play, making it one of the most exciting matchups of the season. This year, the Bobcats faced the Bulldogs over Quinnipiac’s Thanksgiving break, meaning many students had already left school to go home.

Despite that, the atmosphere at Frank Perrotti Jr. Arena was the best it’s been all season and played a factor in Saturday’s game.

“There was some questions going into the game, but our student section was awesome, just like they always are,” Priskie said. “They’re one of the best in the country, if not the best.”

Priskie, who has now played in five games against the interstate rival, sports a perfect 5-0 record.

“It’s one of the games that’s always circled on our calendar and we always get jazzed up to play,” Priskie said. “I mean if you can’t get up to play Yale, I don’t know who you can get up to play.”