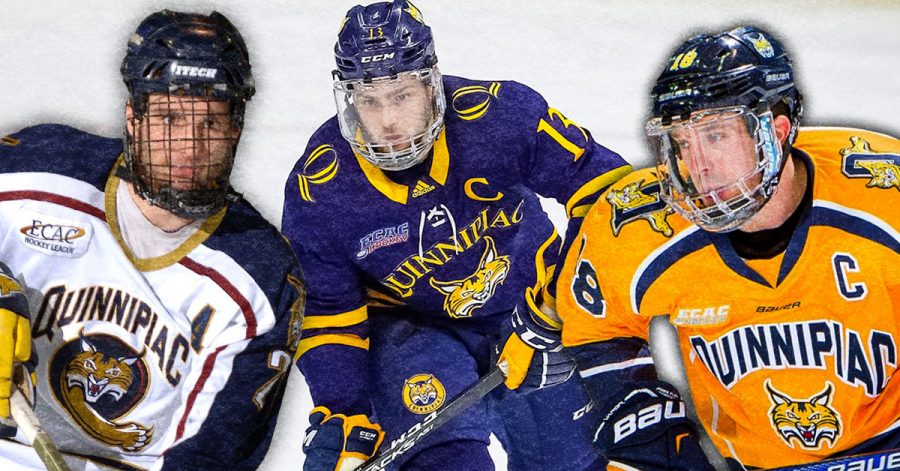 Ending the season before you had a chance to show the world what you were made of — it was one of the most disappointing realities this past March.

#14 Quinnipiac men’s ice hockey was getting ready to do battle with crosstown rival Yale in the first round of the ECAC Hockey playoffs, before the COVID-19 pandemic halted life as we know it to a stand still.

The abrupt stoppage of play meant it was the end of the line for Bobcats captain Nick Jermain and the rest of the seniors who gave four-plus years to one of the top men’s hockey programs in the country.

But the show must go on for Rand Pecknold’s squad, and that meant naming a new captain for the 2020-2021 season.

After serving as an assistant captain the previous year, Odeen Tufto was chosen to wear the ‘C’ on his chest for this winter.  On the ice, Tufto’s stats stand out from the rest, leading the team in assists per game (.91) and points per game (1.12).

Tufto will have some large shoes to fill as he follows in the footsteps of Jermiain, Chase Priskie, and Derek Smith.

And it raises the question — who is the greatest captain in program history?

Beat reporters (and Bobcat Breakdown producers past and present) Tom Krosnowski, Jonathan Banks, and Ryan Flaherty have their answers for you.
Tom’s Pick: Reid Cashman
Quinnipiac men’s ice hockey has had 47 captains in its history, but one stands out above the rest – Reid Cashman, who served during the 2006-07 season.

That year was just Quinnipiac’s second in ECAC Hockey, which presented a major step up in difficulty from its Atlantic Hockey days.

The Bobcats weren’t taken seriously in ECAC Hockey before the 2006-07 season, when Cashman guided the the team to a 21-14-5 record and an appearance in the conference championship game. All of the program’s success since can be traced back to Cashman’s year as captain, putting the Bobcats on the map in an elite conference.

Cashman was a key contributor on offense, scoring 23 goals and 148 points over his four years, an incredible total for a defenseman. He also set the modern standard that Quinnipiac defensemen are compared to for their entire 210-foot game.

Cashman has gone onto coaching positions with Quinnipiac, the NHL’s Washington Capitals and now as the head coach of the Dartmouth Big Green back in ECAC Hockey. There just isn’t a better combination of on-ice talent, leadership and legacy than Cashman when it comes to Bobcat captains.
Jonathan’s Pick: Soren Jonzzon
It’s virtually impossible to pick out the best captain in a team’s history when I have only seen three of them (Priskie, Jermain, and Tuefto) play and interact with teammates in front of my own eyes.

While I will not commit to saying who the “best” captain was throughout Quinnipiac’s storied men’s hockey program, everything I’ve heard about Soren Jonzzon from media members around the team at the time has been overwhelmingly positive.

Jonzzon captained the Bobcats during the 2015-16 campaign, a season in which Quinnipiac surged to a 32-4-7 record and battled all the way to the NCAA Championship Game.

Jonzzon was not a prolific scorer by any stretch (tied for eighth on the team with 20 points), but he was able to manage a team littered with professional talent to play to the ‘Quinnipiac identity’, which led to a successful season where almost every player seemed to reach their full potential as a college hockey player.

Off the ice, Jonzzon balanced his duties as captain with a rigorous course load as a biomedical sciences student (he is currently a surgeon doing his residency in Nashville, per Priskie’s twitter page).

2015-16 Archive: Got to learn from @DevonToews6 and @SJonzzon18 everyday. Devon now plays for the @NYIslanders and Soren is a surgeon, doing his residency in Nashville. Two great mentors for my freshman year at @QU_MIH pic.twitter.com/bN0yIR4ekX

I don’t know who the “best” men’s hockey captain has been at Quinnipiac, but I do know you don’t have to be the most skilled player on your team to be a well-respected leader.

Through his compete level, effort and commitment in everything he did as a Bobcat, Jonzzon embodied what it meant to wear the ‘C’ for one of the most successful programs in college hockey.
Ryan’s Pick: Chase Priskie
When you think of great captains on the Quinnipiac men’s ice hockey team there are many names that come to mind. For me, the name that stands out above the rest is Chase Priskie.

It would be easy to say names like Connor Clifton, Matthew Peca, or Zack Currie as guys who put Quinnipiac “on the map,” and it may be a bit of recency bias, but to me Priskie’s importance to the program cannot be understated.

Priskie, now member of the American Hockey League’s Springfield Thunderbirds, was the captain of the Bobcats in his junior and senior seasons, leading Quinnipiac to last year’s NCAA tournament.

In 2017-2018, the Bobcats were coming off their worst season in almost 20 years and a complete overhaul of the team’s culture was taking place. The man at the forefront of that change was Priskie.

He talked with student media extensively at the time about how his team’s performance in his junior season was unacceptable and he made it his mission to return the program to their winning ways.

In his senior year he led the Bobcats back to a winning record, an ECAC regular season championship, and a berth in the NCAA tournament. He set a program record for goals by a defenseman (39), finished second on the all-time scoring list among Quinnipiac defenseman with 116 points, and was lethal on special teams with 10 power play goals that led the nation.

Not only did he walk the walk on the ice as a top-ten Hobey Baker Finalist, but off the ice he won the senior C.L.A.S.S. award,which is given to a student-athlete who excels in their sport, in the classroom, and in the community.

His legacy has stayed with members of the current team as Quinnipiac has continued to have success as a nationally ranked program. Pecknold continually talks about how important finding that identity was and how it’s led his current team down a much better path.