Brage Aasen Signs Semi-pro Contract — What Does He Bring to Vermont Green FC? 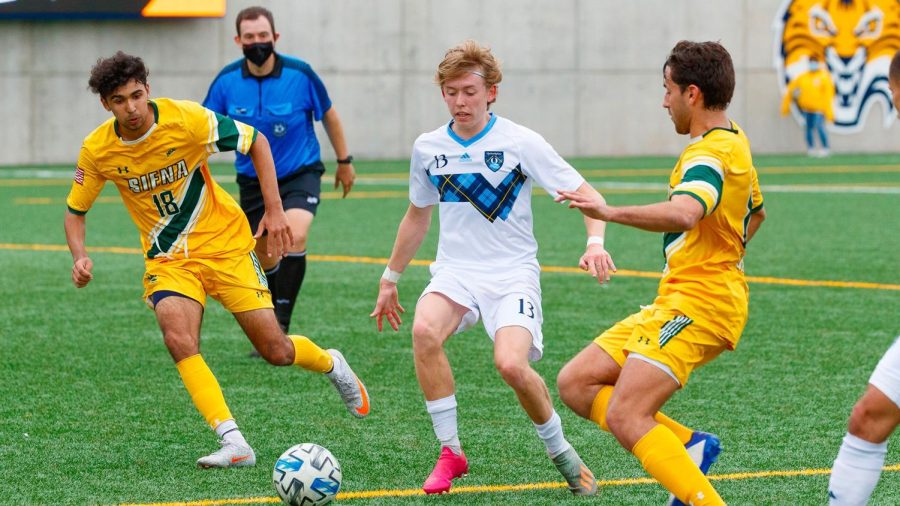 Brage Aasen is on the move….. Well, not exactly.

The Norwegian forward has signed for Vermont Green FC, a USL League 2 side.

USL League 2 is a pre-professional league that aims to give the top collegiate players in the country the opportunities to train at a very high level, while also maintaining NCAA eligibility.

The season lasts from early May to mid July, with each team playing a 14-match regular season, and the winners of each division facing off in a playoff scenario that ultimately crowns a national champion in August.

Now what does this mean for the Quinnipiac forward? And what will Aasen add to the team?

The flashy goal scorer has already had an impressive career at Quinnipiac thus far contributing 17 goals and 13 assists in just 43 games.

On top of this he has racked up All-MAAC honors twice, an All-Rookie Team appearance, and even United Soccer Coaches All-East Region Second Team honors in 2021.

Aasen has the x-factor. Whether he is on a wing on the complete opposite side of the field, or dropping deep as a 6 to try to get the ball and jumpstart an attack, he is always a danger. The forward must be constantly marked, and there’s no doubt about it.

Aasen has no problem shooting from thirty yards out, or taking on three players to slip someone in behind, and because of this he is constantly dragging defenders across the field creating pockets for his teammates to exploit.

For Vermont, a team that will be having its inaugural season in 2022, he brings experience and attacking creativity into this team.

Aasen has also been a quiet leader on this Bobcats team. While he isn’t the most vocal player on the pitch, his knowledge of the game is something that constantly shines through.

He acts as a point guard when he is on the ball calling out plays. Aasen constantly picks up the ball, and is directing people where to move, and effortlessly getting around defenders.

His versatility also makes him a major threat. He can play in any position across the front three, and never starts consecutive games in the same position.

This is just testament to Eric Da Costa’s coaching style.

Coming into the 2021 spring season, the big question surrounding this program was how Eamon Whelan would be replaced. The team slowly shifted into an ever rotating front four, with Aasen being the creative focal point of this attack.

The experiences he got playing in this type of system playing in multiple positions are the reason he is attracting interest from coaches, and why he will be a major success in Vermont.

Aasen has become a household name in the MAAC, and with improvement each and ever year, and the experiences he’s getting and will continue to get, it’s only a matter of time before another Quinnipiac player goes pro.