Dalton: Quinnipiac should be in the USCHO women’s poll 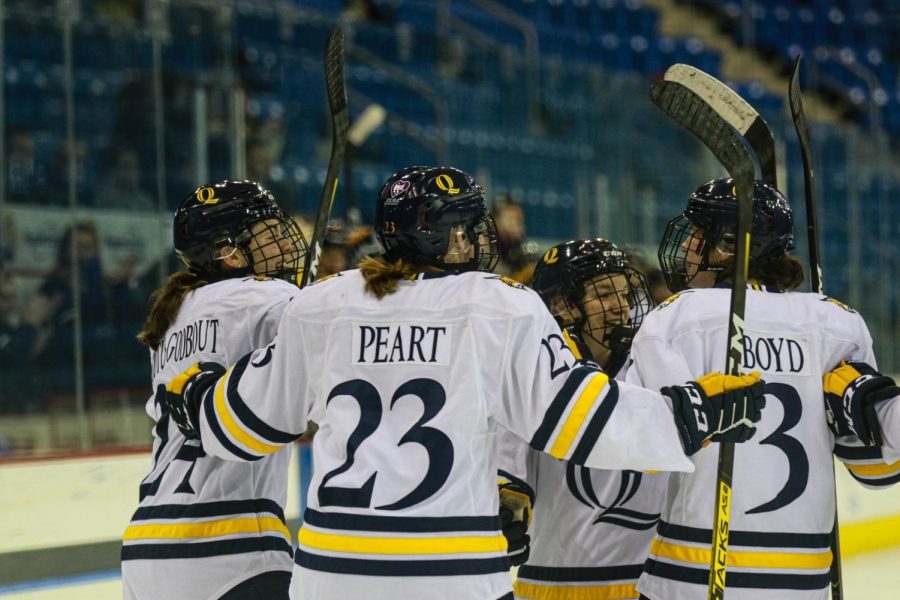 I had my doubts about the Quinnipiac women’s ice hockey team before this season started.

On top of that, the Bobcats weren’t able to produce much offensively. Since their ECAC Hockey championship, the Bobcats haven’t had a single player reach 30 points in a season. Although the Bobcats continued to have one of the best defenses in the country along with solid goaltending… this is hockey. And in order to win hockey games, you have to score goals.

At the beginning of the season, the Bobcats started strong going 4-1-1 in their first six games. But once the Bobcats entered conference play, whatever momentum they had came to a screeching halt. The Bobcats got off to an 0-4-1 start, their worst since joining the ECAC Hockey Conference in the 2005-06 season. They got their first conference win over RPI, but proceeded to lose to a Union team that, going into that game, had never beaten them.

The Bobcats were in second-to-last place in the conference and didn’t look like the “hard to play against” team they used to be.

Then something happened… they started winning.

After that Union loss, the Bobcats let out a roar so loud it rattled the entire ECAC Hockey standings.

Since Nov. 22, 2019, the Bobcats are 8-1-1. Their only loss being to #4 Cornell and the tie coming against #5 Clarkson. The Bobcats were also crowned Nutmeg Classic Champions for the eighth time in program history after beating #10 Minnesota-Duluth and Yale. The Bobcats pulled off another upset, handing #9 Harvard its first loss in conference play this season.

Now, the Bobcats are tied for fifth place in the ECAC Hockey standings and just two points behind Clarkson, who was ranked fifth in the most recent USCHO Women’s Division I Poll.

Every Monday at noon, USCHO.com releases its updated polls for Division I and Division III hockey. So is there any chance we might see the Bobcats make the list?

Given all of the recent success the Bobcats have had over the past two months, here are five reasons why they’ll soon be listed on the USCHO Women’s Division I Poll.

Adzija is building off a solid first-year campaign that saw her record 7 goals and 11 assists for 18 points and finish fourth on the team in points. This year, Adjiza already has 10 goals, 13 assists and leads the team in points with 23. Based on the pace she’s going, the Bobcats should have someone reach the 30 point mark for the first time in four years.

As for Coutu-Godbout, she scored 15 goals and 16 assists for 31 points over the first three seasons of her collegiate career. This year, she’s taken her game to a new level. She has 12 goals and 5 assists for 17 points.

Both Adzija and Coutu-Godbout are in the top 10 in ECAC Hockey in goals and Adzija is tied for eighth in ECAC Hockey in points. As long as these two keep finding ways to produce offensively, the Bobcats will keep climbing the invisible ladder straight to the top.

“In the past couple months, even last night you look at her game last night against Harvard, she really kept us in there,” said Lexie Adzija after a 5-1 win over Dartmouth on Jan. 11, 2020. “I think she wasn’t just good today, she’s been good overall for us this year.”

Ives is second in ECAC Hockey in starts in goal. Usually when a goaltender plays more games, their stats tend to go down and Ives is not one of those players. In ECAC Hockey, she ranks top five in every statistical category including goals-against average, saves, save percentage, wins, win percentage and minutes.

She’s the anchor to a defense who has developed the reputation of having the best team defense in the country. As long as Ives on her A-game, the Bobcats could easily make an appearance on the USCHO Poll. Speaking of defense…

Offense wins games, but defense wins championships. This saying applies to almost every sport, including hockey.

The Bobcats are also a team that hasn’t really been crushed by a team offensively, with the largest goal margin on the losing side being a 4-1 loss to #4 Cornell. But before that game, the Bobcats held Cornell to only one goal in a 1-0 losing effort.

Recently, the Bobcats have given up just 15 goals in 10 games. Three of those games were against top 10 teams.

Defense is a large part of the Bobcats culture, and if their defense keeps this up, the USCHO Poll will eventually have to take notice.