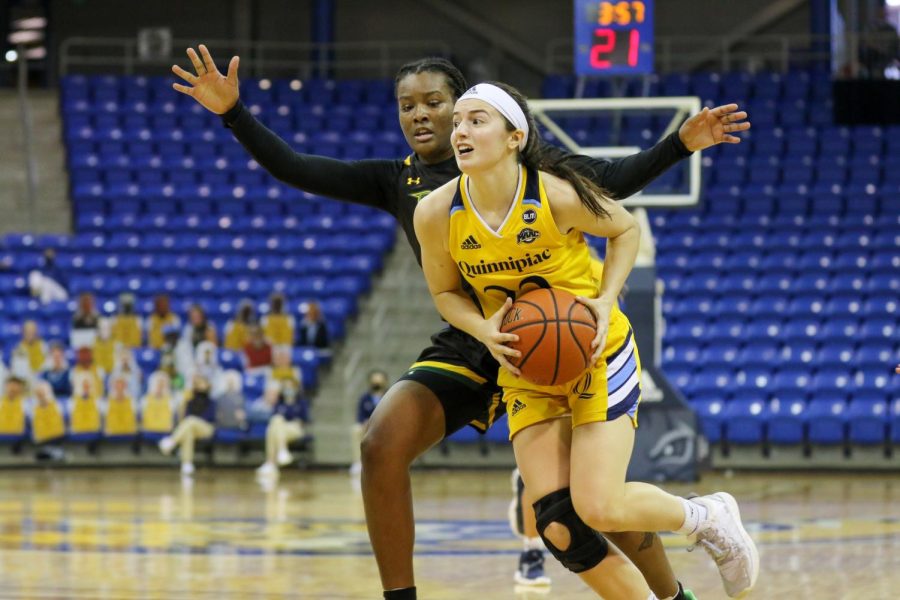 Just days before the Quinnipiac women’s basketball media day Monday afternoon, the Bobcats were tabbed as No. 1 in the MAAC preseason coaches poll with six first-place votes. However, a preseason projection doesn’t hold too much weight for the team’s highly accomplished head coach, Tricia Fabbri.

Entering her 27th season at the helm for the Bobcats, with 461 career wins, five conference titles, four MAAC coach of the year honors, and five NCAA tournament appearances, Fabbri’s program is one that’s about the next results. But there’s no doubt this team has the pieces to live up to that top projection.

“Our depth is a weapon,” Fabbri said. “We have incredible talent, exceptional returners with experience, and players who have been able to handle the heat of the battle from the past. You’re talking about a lot of young ladies that have garnered a lot of experience and that’s always a nice comfort to put your head on the pillow at night as a head coach.”

Among those experienced players on this Quinnipiac squad is the reigning MAAC Player of the Year, senior guard Mackenzie DeWees. She finished a breakout junior campaign sixth in points and rebounds, first in field goal percentage, fourth in steals, and seventh in assist-to-turnover ratio among MAAC conference ranks.

But like any great team player and leader, building up more personal accolades off a conference player of the year honor is the last thing on her mind.

DeWees’ two-way prowess will be matched by the reigning MAAC Defensive Player of the Year, junior forward Mikala Morris. She finished her sophomore campaign as the leading rebounder in the conference averaging 10.7 a game, and fifth in scoring averaging 13.7. Her defensive honor speaks for itself, ranking second in the MAAC in blocked shots, 10th in steals, and atop the ranks in offensive and defensive rebounding last season.

In addition, the Bobcats bring back an All-MAAC Third Team member, senior guard Rose Caverly. The former Vermont Catamount ranked third in assist-to-turnover ratio and fifth in assists in the MAAC. She also averaged 10.4 points per game while starting every game in her first year in Hamden.

“I felt like I was a freshman last year learning a whole new system and the coaches still wanted me to be vocal,” Caverly said. “So now I’m way more comfortable doing it with a year of Bobcat basketball under my belt. The freshmen are really going to help us down the stretch as well so just making them more acclimated is really important for us.”

Fabbri is thrilled to have a solid mix of young incoming players, to match the experienced, highly accomplished Bobcats as well.

“We’ve infused (our experience) with incredible young talent in a freshman class with Reiven Douglas, who’s doing a great job out there,” Fabbri said. “All the young ones are getting their footing and a true understanding of what we’re incorporating in terms of offensive and defensive systems. It’s a nice blend, an infusion of youth, great experience, and talent coming together with a common goal and a hunger.”

Quinnipiac finished with a 13-8 overall record and an 11-5 conference record, before falling in the MAAC tournament quarterfinals to Rider last season.

The Bobcats will open their season at Fordham on Nov. 9. They’ll then host four non-conference games, welcoming a crowd to the People’s United Center for the first time in 19 months. Including a home opener against the no. 8 Indiana Hoosiers.