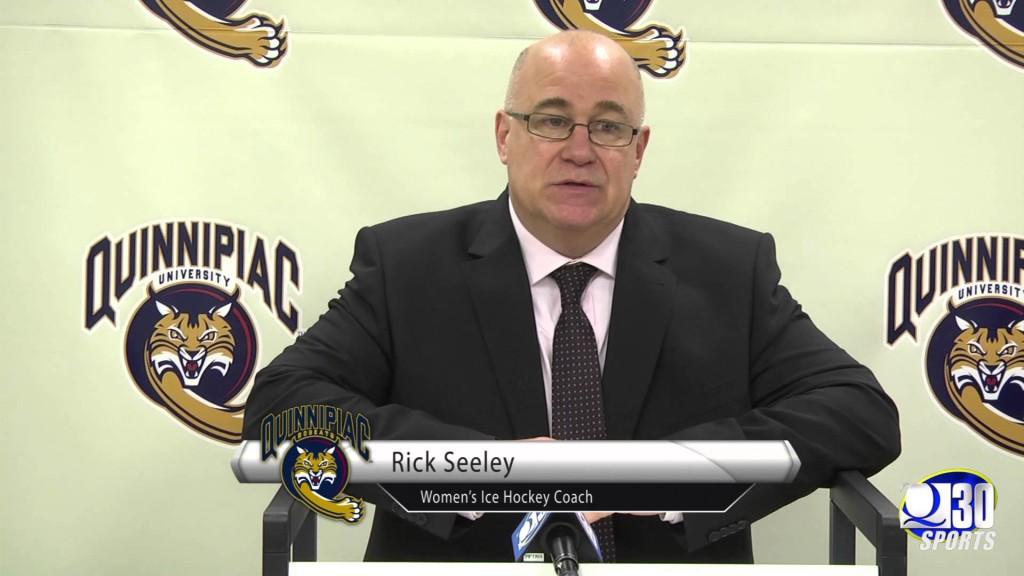 Reporting for this story was done by Jon Alba and Morey Hershgordon. Due to the graphic nature of the content, reader discretion is advised.

Less than a week after Quinnipiac University women’s ice hockey coach Rick Seeley resigned from the school amid allegations of abuse, multiple former Clarkson University players have stepped forward with accusations of their own.

Q30 Sports reported Wednesday Seeley had been under internal investigation following an incident during the NCAA Tournament where he allegedly grabbed one of his players in a forceful manner. There has been no public account of the incident as of yet. Several former and current Quinnipiac women’s ice hockey players contacted for this story declined comment. Seeley did not respond to Q30 Sports’ calls for this piece.

The report prompted three of Seeley’s former players at Clarkson, as well as a player’s father, to contact Q30. All sources were independently interviewed for this story. Seeley began his Division I coaching career at Clarkson with the start of the 2003-2004 season, also Clarkson’s first in Division I play.

“Everything was all about winning and performance on the ice, I don’t think he really cared about any of us as people, just as athletes,” Cailin O’Hara said. O’Hara transferred to SUNY Cortland following the 2003-2004 season.

Much of the abuse came from Seeley’s desires to succeed, the players said.

Courtney Bills, who played for Seeley in his first season, said she is still in therapy today as a result of the alleged abuse, more than 11 years after last playing for him.

“There was times where he would take a helmet and throw it in the locker room, punch the chalkboard, slam the door screaming in your face,” she said.

Bills also transferred from the program after she could no longer deal with Seeley’s methods.

She recalled one particular incident both she and her father claim occurred during a game as a referee witnessed.

“I remember one time, I lifted my leg when a slap shot was coming at me,” she said. “And I got to the bench and he grabbed me by the jersey, and just, how he probably did the same thing to this other girl [in the NCAA Tournament], and said ‘If you do that one more time, I’m going to f—ing cut your legs off.’”

She said the incident traumatized her enough she involuntarily urinated in her pants, leaving her speechless.

“I just have never been, ever, ever treated like that in my whole life,” she said.” I’ve never been that scared.”

“It was only a matter of time before he got caught,” David Bills, Courtney’s father, told Q30 Sports. “He was an extremely abusive man and should not be coaching young women.”

Jillian Nolan-Staley, then known as Jillian Nolan, suited up for Clarkson for two seasons before joining Courtney at Utica. She said Seeley would skate the players until they “puked” before or after games.

“We lost a game that he wanted to win, and actually the reason we got off the ice at that time was when the zamboni opened the doors and pretty much came onto the ice,” Nolan-Staley said. “I don’t think his intentions were to have us stop skating at any particular time.”

Nolan-Staley said many brought their concerns to their assistants, but little came from it.

“To cry to our assistant coaches – we had a female assistant coach, thank God, who was nothing like the way he treated people, but at the same time, even the good in her can be brainwashed to his techniques,” she said.

David Bills was made aware of the alleged incidents by his daughter midway through the 2003-2004 season. In 2005, he penned a seven-page letter to another parent with a daughter on the team. The letter contains handwritten accusations from a year and a half prior of verbal, physical and mental abuse gathered after speaking with “at least” eight Clarkson players, including his daughter, Nolan-Staley and O’Hara. He said he took the notes directly to President Anthony G. Collins and other administrators.

Among the accusations in the notes are claims of Seeley forbidding his players from having sex with their boyfriends because “[they] do not want a team full of sluts.”

A bus ride from a game against Cornell University is chronicled, where it is alleged Seeley did not allow any blankets, pillows, sleeping, smiling, laughing or talking. O’Hara said this was typical of most bus rides, and if any of those rules were violated, he would bump into or poke the players.

The notes also detail the mental abuse Seeley allegedly inflicted on the players. One mentions they were afraid he would hit them, while another claims she was afraid to fall asleep without another girl on the team physically in bed with her so she could close her eyes. Another said Seeley made her want to “drink to forget” all the bad times.

They also say Seeley informed his players not to tell their parents what went on in the locker room, because he said it was none of their business. “F—” is frequently mentioned throughout the papers.

O’Hara said the athletics department then interviewed each player one by one. She said the women who spoke up were then isolated from the rest of the team.

“It was definitely swept under the rug and not really dealt with,” she said. “We were definitely made examples of after that, because he knew we had come forward about him to the school, so he was not happy.”

She said she rarely saw ice time following being interviewed, a punishment both Courtney and Nolan-Staley also said was inflicted on them and the others who spoke up.

After some time had passed, David contacted Clarkson administration in February of 2004 once more to find out what sort of discipline had been taken on Seeley. He received a letter from Collins two weeks later, confirming the university would review the situation. He noted “appropriate actions” had been taken, and wished to move forward from the incident. Collins also promised to notify David of the outcome of the review.

The notes and administrative letter provided to Q30 Sports can be found below. A link to the photos can be found in PDF format here.

Eleven years later, David said neither Collins nor the university have contacted him. David said he had heard Seeley was ordered to anger management, which gave him temporary peace of mind, though said little changed with the coach’s demeanor during the remainder of his daughter’s tenure at the school.

When asked to confirm the review on Seeley and what specifically the “appropriate actions” were, a Clarkson University official declined comment. Q30 Sports was told school policy prohibits the disclosure of any personnel information regarding any employee, past or present.

“While we cannot speak to questions about specific employees, we do look into student and family concerns brought to our attention,” Director of News & Digital Content Services Michael P. Griffin said.

Courtney believes it was fear of consequences that prevented many of the former players from speaking up at the time. “When we tried to do something about it, everyone was so scared. When you’re just 18, 19 years old, you just shut your mouth,” she said.

“We all want to play, we all want ice time,” O’Hara said. “At that level of women’s hockey, it’s like as high as you can get. Everyone just doesn’t want to get their rink time taken away, and they want to be able to do what they love to do and play hockey. So he definitely had that over everyone’s head that he controlled the lineup, and who gets to play however many minutes, that definitely was a big factor for a lot of the girls.”

But Nolan-Staley said even though nothing was made public, the alleged abuse had a lasting effect.

“It was the verbal abuse, the grabbing and the belittling making you feel like you were literally worthless,” she said. “If anything, it would turn me into a monster.”

Q30 Sports contacted Quinnipiac Athletics over whether the school had been made aware by Clarkson of any review or punishments towards Seeley when he was hired prior to the 2008-2009 season. No comment had been returned as of press time.

Seeley had been under contract with Quinnipiac through 2018 after signing two contract extensions.

In a new report by the Quinnipiac Bobcats Sports Network, Quinnipiac Director of Athletics & Recreation Jack McDonald gave comment regarding the allegations in this report. He denied having knowledge of the accusations.

“Obviously if we knew what is being alleged, then [the hiring] just wouldn’t have happened,” he said.

Q30 Sports requested an interview with a member of Quinnipiac administration to discuss whether the school had any knowledge of the allegations against Seeley. Quinnipiac Public Affairs returned the request with the following:

“The university is not making any additional comments.”