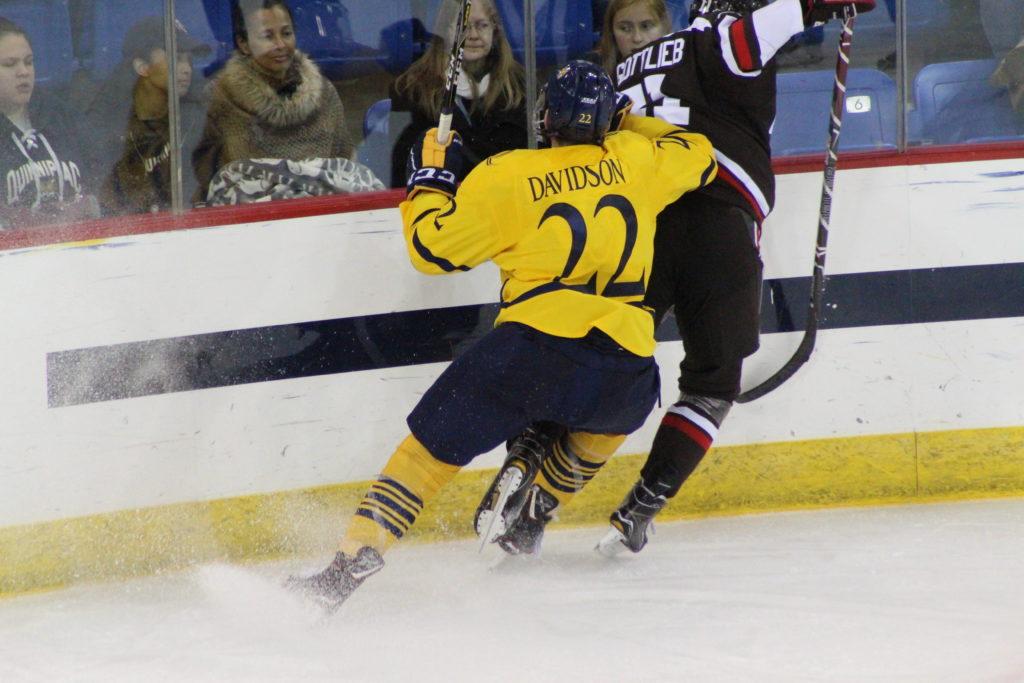 The Bobcats started off strong, playing the early half of the first period in typical Quinnipiac fashion. Bobcats’ head coach Rand Pecknold  described his team in the early part of the game as “dominant.”

“We were so good for 13 minutes,” Pecnkold said. “We have to find a way to deal with adversity better. It has been a problem this year.”

Scott Davidson scored first for Quinnipiac, finally getting the proverbial monkey off his back after not scoring in 20 months. The Bobcats’ junior saw a redirection off his foot beat Maine goaltender Jeremy Swayman. It was his first goal since the NCAA East Regional Final in March 2016.

Later in the period Bo Pieper took a pass from Landon Smith on an odd-man rush and went top shelf to tally his third goal on the year.

Tanner MacMaster then added what Quinnipiac expected to be insurance with a highlight reel goal of his own. MacMaster displayed patience to outlast his defender and used a toe drag from left to right to beat Swayman and give Quinnipiac a 3-0 lead.

But what ensued afterwards was a mental breakdown by Quinnipiac. And it was not the first time that has happened in the game or even this season.

“It was just chaos and panic and turnovers and bad penalties,” Pecknold said.

Maine rattled off three unanswered goals, two on the man-advantage, to even the score before heading into the final frame.

Three minutes into the final period, Karlis Cukste put the Bobcats back on top. Thomas Aldworth drove to the front of the net while playing 4-on-4, but lost control of the puck. However the junior defenseman crashed the crease on the back door, picked up Aldworth’s turnover, and found the back of the net to give Quinnipiac the 4-3 lead.

With the game knotted at four, a trip to overtime was looking likely, but Maine had other ideas.

Three quick strikes by the Black Bears, all within 1:12 of each other and inside the final 5 minutes of regulation, buried the Bobcats. A Eduards Tralmaks goal highlighted the lethal minute for Maine.

Pecknold was blunt in his response to his team’s struggles.

“It continues to be frustrating,” he said. “We got a lot of kids that just aren’t playing well right now.”

Quinnipiac will look to regroup quickly, as they face Maine once again on Saturday night at home at 7 p.m in the last game of 2017.