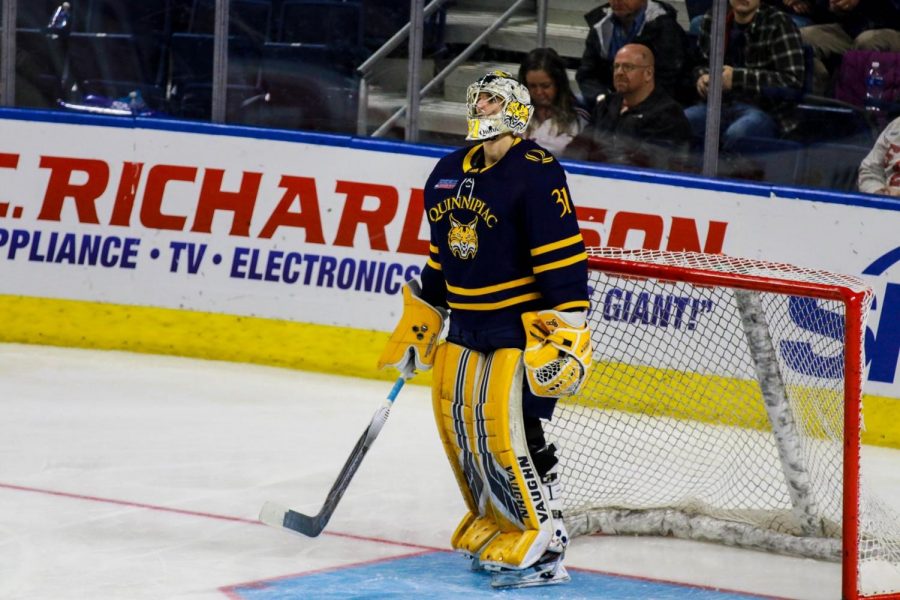 With the win, the Bobcats also picked up their second series win against the Atlantic Hockey Conference after sweeping Sacred Heart University a week ago.

Quinnipiac outscored Holy Cross 9-1 in a series that saw the rejuvenation of what had been a dormant power play unit.

The members of the power play unit were not the only standouts in these last two games, here are the 3 stars of Quinnipiac’s series win.
First Star: Desi Burgart
Not usually known for his offensive ability, Burgart has been quietly one of the Bobcats’ best players on the season.

Burgart tallied three goals against Holy Cross and they all came exactly where you’d expect: in front of the net. While the rest of Bobcats have struggled to get pucks to the net, he found success cleaning up rebounds in front of both Matt Radomsky and Erik Gordon.

To go along with his three goals, Burgart also leads the Bobcats as a stout defender with eight blocked shots which is second nationally among forwards.
Second Star: Keith Petruzzelli
Petruzzelli continued his fabulous start to the season, looking as good as ever against Holy Cross. The backbone of the Quinnipiac defense stopped 44 of 45 shots on goal while almost pitching a shutout in 120 minutes of play.

The only goal allowed by Petruzzelli in this series came in game one off an errant bounce as the Bobcats couldn’t clear the defensive zone on the penalty kill.

Petruzzelli continually makes tough saves looks routine and has received high praise from both Rand Pecknold and his teammates about his ability to compete at a high level night in and night out.
Third Star: Ethan de Jong
The junior from British Columbia was a key piece to the aforementioned success of the power play units against Holy Cross. De Jong scored twice on the powerplay against the Crusaders to go along with an assist and a handful of quality shots on goal.

De Jong was able to get lost out in front of both Radomsky and Gordon and on both accounts capitalized on his opportunities, once on a rebound and again on a re-direct.

His ability to provide a spark to the first power play unit could be monumental moving forward as the Bobcats inch closer to ECAC Hockey play.

Quinnipiac faces yet another quick turnaround as they head back to Hamden for a Saturday night matchup with No. 19 American International College at the People’s United Center. Puck drop is set for 7 p.m.