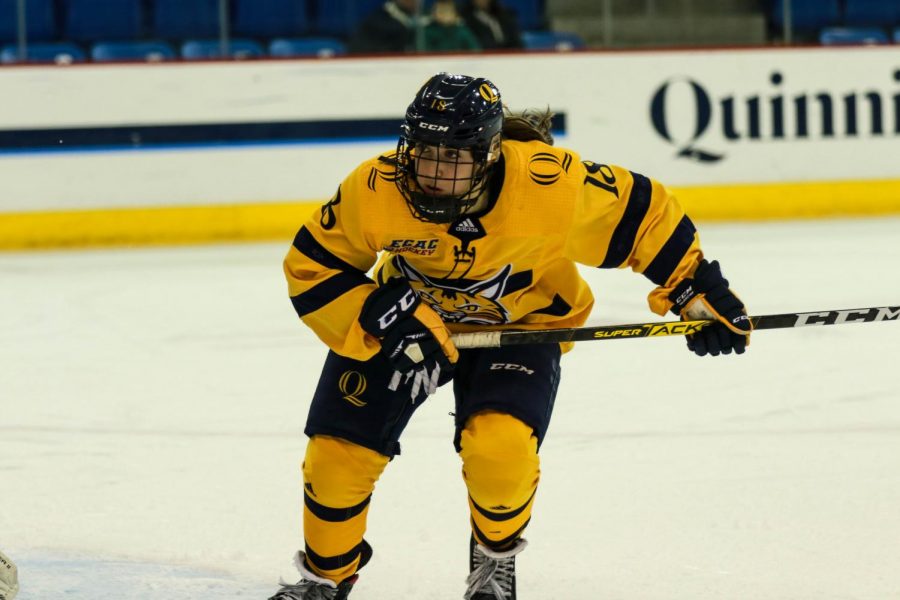 The Quinnipiac women’s ice hockey team dropped its penultimate game of the ECAC hockey
season, 4-1, against the Yale Bulldogs. A win for the Bobcats would’ve meant they take over
the fifth seed. Instead, a Yale and Colgate win dropped them to seventh. While there were
many skills lacking on the ice, it was who didn’t step on the ice for the Bobcats that could’ve
made a massive impact.

For starters, sophomore forward Lexie Adzija was not in the line-up sheet. The absence of the
Bobcats’ point-leader was clear as Quinnipiac not only took less shots but appeared to generate
fewer quality scoring chances in the game. Quinnipiac was outplayed at the faceoff dot, losing
draws 42-17. Adzija usually takes upwards of 20 faceoffs a night and wins over half of them.
Looking back on the previous weekend, Adzija won 15-26 faceoffs against Clarkson, and won 16
out of 29 draws in the loss against St. Lawrence.

It wasn’t a forward that stepped up in absence of Adzija. Captain Kenzie Prater turned back the
clock and found herself on the first line. Prater was recruited as a forward and converted to
play defense after the 2017-2018 season with the Bobcats. Taylor House moved over to center,
but Prater and House ended up taking a combined 22 faceoffs, winning eight. Adzija has played in all but two games this season, including the most recent loss.

Without one senior captain in defense, QU’s blue line looked misguided. The Bobcats rotated
through five defensemen for the entire game. Splitting up the defensive pairs hasn’t been an
issue this season. In fact, Cass Turner and her players has said multiple times they will succeed
in any combinations of pair. However, communication seemed to lack between the pairs, and
the Bobcats ran out of gas in the waning minutes of the game.

First-year Alexa Hoskin was also not on the lineup card but showed no visible injuries. On the
other hand, redshirt first-year goaltender Logan Angers was seen with crutches on the bench
during warmups. The Bobcats are now down to two goaltenders, Abbie Ives and first year Allie
Kelley.

The Bobcats could move forward with two goaltenders, according to section two, rule 5.2 in the
NCAA 2019-2020 Ice Hockey rules. However, this puts the team in a unique situation, like last
year, when Alison Small transferred to Syracuse. First-year Juliana Daddio became the third-
string goaltender.
There was also a roster change as backup goalie Allison Small is no longer a part of the program. Freshman Logan Angers will now serve as the backup goalie. QU has also added Juliana Daddio to the roster to be the third goalie #ECACHockey https://t.co/TAi5Dtn9hs— Shane (@shanedennehy15) January 4, 2019

This might see the Bobcats bring back the North Haven resident once again
or look to a different pool of talent for a filler for the spot before the ECAC Hockey playoffs start
up on Feb. 28.

Bobcats play Brown University on senior day Saturday to round out their ECAC hockey season.