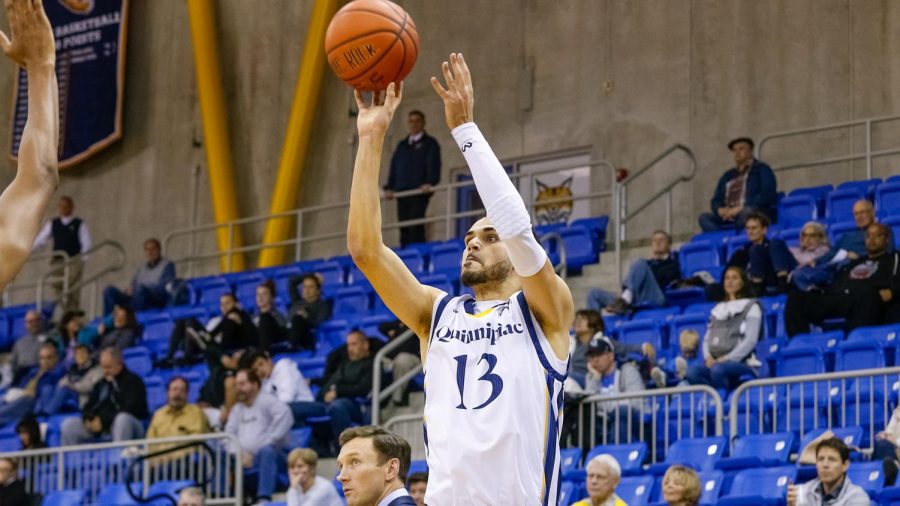 Looking to avoid a three-game skid, the Quinnipiac men’s basketball team lost a close contest to Manhattan on Sunday afternoon by a score of 65-63. The loss is the second straight home defeat for the Bobcats.

Quinnipiac is now 6-6 in the Metro Atlantic Athletic Conference as Manhattan jumps over them in the standings. The game also saw a total of 25 Quinnipiac turnovers, 18 coming in the first half.

“[Manhattan] doesn’t really care if they foul or whatever [on defense],” sophomore guard Tyrese Williams said. “So, they rather pick you up, speed you up and that’s why we had 25 turnovers.”

Despite all those chances off turnovers for Manhattan, the Jaspers really couldn’t pull away as their biggest lead was only 11 points midway through the second half. This allowed Williams to tie the game at 60 with under a minute left and then graduate forward Aaron Falzon was able to tie it up once again with under 10 seconds to play.

However, a Tykei Green spinning layup put Manhattan ahead with about two seconds to play that sealed the deal for Jaspers to secure the season sweep over the Bobcats.

“When we turn over the ball much it’s ugly and it just doesn’t feel good,” Quinnipiac head coach Baker Dunleavy said after the loss. “You just got to find a way to grind through it, but it is frustrating and it’s not a fun way to play.”

Throughout the game, Manhattan seemed like it was dictating the pace of play by speeding Quinnipiac up by picking up full court for the entire game. Williams noticed this and admitted that his squad needed to be better.

“Just be more solid,” Williams said. “This league is not easy, and I think these last two games were a real big test for us and even though we lost both games I feel like we are moving in the right direction.”

Dunleavy went on to say that the physical play that his team has seen in the past two games is hard to prepare for especially on the quick turnaround this team experienced.

With the loss, Quinnipiac falls out of the top five in the MAAC for the first time this season after the team’s longest losing streak of the season.

When asked what to do going forward Dunleavy said it starts in practice by playing more physical and continuing to learn while getting better.

Quinnipiac will have some time to get better during practice over the course of this week with the team’s next game coming on Friday, February 14 in Jersey City with Saint Peter’s standing in its way.