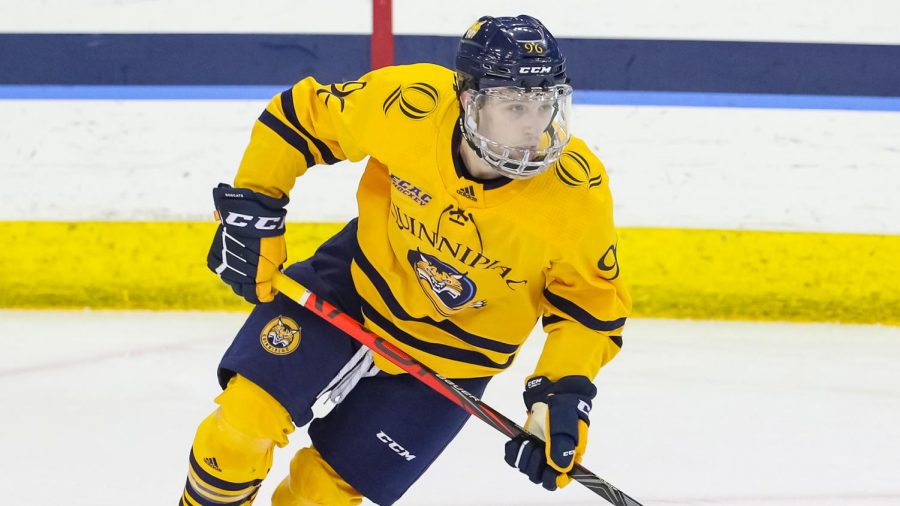 A balanced offense and team defense has been a vocal point of head coach Rand Pecknold’s Quinnipiac men’s ice ice hockey team, which is 2-0-1 to start the season.

Quinnipiac has played No. 6 Boston College and No. 18 Northeastern and has come away with at least a point in every game.

“It’s been a good start to the year,” Pecknold said. “We’ve been tested by some good opponents, I really like our compete level, goaltending’s been excellent, the penalty kill has been great.”

The penalty kill has been exactly as Pecknold said. The unit has gone nine-for-nine to start the season, led by defensemen Zach Metsa and Griffin Mendel.

If there were any questions about goaltending once former Bobcat Keith Petruzzelli left this summer they seem to have been answered. Both Dylan St. Cyr and Yaniv Perets have recorded shutouts this season in just the three games played between the two so far.

Perets got starts against Boston College and Northeastern, stopping 36 of 38 shots faced. The sophomore goaltender made the most of his chance after backing up Petruzelli last season.

St. Cyr’s debut as a Bobcat went as well as it could have gone. The former Notre Dame goaltender stopped all 14 shots in a 2-0 win over Vermont after Quinnipiac allowed zero shots in the first period. St. Cyr’s track record speaks for itself after capturing a gold medal in the 2017 U18 World Junior Championships with Team USA and posting a .921 save percentage in 22 games with Notre Dame last season.

“Both goalies have played well,” Pecknold said. “Yaniv’s both starts have been excellent. Dylan had a tough game, they didn’t get a shot until more than halfway through the game so those are hard games because you’re cold. Vermont started to come on later in the game and he made some nice saves. He’s a veteran he’s played plenty of college hockey games and won a lot against good teams so we’re excited with our goaltending this year.”

The offense has seemed to have found a rhythm as well. 11 different Bobcats have recorded a point so far, giving Quinnipiac loads of depth scoring and Pecknold the option to roll out four dangerous lines.

“You look down our lineup and everyone’s got a bunch of games and experience,” senior Michael Lombardi said. “Even our young guys have played really well. They’ve played the part and they’ve really bought in. Obviously having five grad transfers helps you a lot because they can pick up right where they left off.”

Lombardi himself has been off to the best start in his career. The senior from Barrington, Rhode Island, has four points in three games after a breakout season last year 16 points in 28 games. The forward seems to have thrived so far in the bigger role this season with the club.

Graduate transfers were something Quinnipiac made essential during the offseason. In 27 years at the helm of the program, Pecknold took on one total graduate transfer, while this season he took in five. All are looking to play key roles in the Quinnipiac lineup.

One thing that was emphasized was playoff experience. Two of the five graduate transfers have won a National Championship in Oliver Chau and Mendel.

Chau may be the biggest fish Quinnipiac caught over the offseason and will be put into a huge position in Quinnipiac’s lineup. The transfer from UMass has been the number one center on this team through three games as expected. He has yet to record his first point with the Bobcats but has been effective in recording five shots on goal.

The dynamic playmaking forward looks to bring the same 22 assist/27 point season last year to Quinnipiac on a line with captain Wyatt Bongiovanni and senior Ethan De Jong. If these three and their 215 collegiate career points can click together, look for this to be one of the most productive lines in all of college hockey.

Just because Quinnipiac has a strong top line it doesn’t mean the Bobcats can’t score throughout the lineup. Just take Gus Van Ness’ 15 points last year playing on the bottom-six. Or Lombardi’s four points through three games who could see more ice time after the strong start.

Sophomore Ty Smilanic is also primed for a big year. The Florida Panthers’ third-round draft pick scored 14 times in his rookie campaign, with six of those on the power play, good enough for 11th in the nation.

“Ty was one of the better bumpers in college hockey last year,” said Pecknold. “he’s really good at it, probably will leave him there and Wyatt’s (Bongiovanni) strength is that right flank spot so most likely we’ll leave everything as is but we’ll see how everything goes.

It didn’t take the sniper long to get on the score sheet as he scored the first goal of the season for Quinnipiac.

But you would be just as wrong to think that the Bobcats can only produce offense through forwards. Quinnipiac has the nation’s leading point-getting defenseman from a year ago on their team in Metsa.

Metsa had 26 points last year with Quinnipiac, including 11 power play-assists which ranked first in the nation, and 14 power-play points which had him at the number one spot again. Metsa is a huge reason why the Bobcat power play ranked sixth in the nation.

The gifted offensive defenseman paired up with 6’5” Mendel seems like a match made in heaven as the two complement each other nicely, with one being more on the offensive side of things while the other can play the shut-down defensive role allowing the other to jump in the play more often.

The future looks bright on the Bobcats defense as well. Former U18 WJC captain Iivari Rasanen is heading into his second season with the Bobcats. The top-end Finish prospect known for his defensive game had a nice season offensively as well last season putting up eight points in 25 games.

Rasanen and Nick Bochen will look to help shape out this Bobcat blue line as the latter saw his minutes rise as well throughout last season.

A solid start to the season for Quinnipiac should foreshadow what’s to come for Pecknold’s squad, as the club has already moved up from the No. 9 team in the nation to No. 7. Quinnipiac will play back-to-back games this weekend against No. 7 North Dakota.