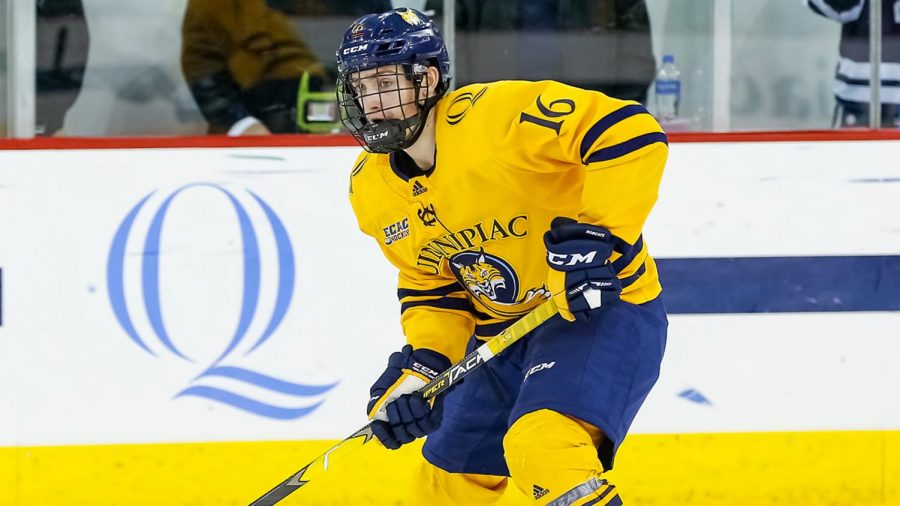 The Quinnipiac men’s ice hockey team received some tough news yesterday when it was announced that junior forward William Fällström will not be returning to Hamden in the fall.

Instead, Fällström will play in his home country of Sweden for Tingsyrds AIF, a professional team in Sweden’s second-tier HockeyAllsvenskan league.

Fällström suited up in 71 games for the Bobcats over the past two seasons and tallied nine goals and 29 assists for a total of 38 points, including 16 assists in the 2019-20 season which was good for the second-most on the team.

Now, with Fällström out of the line-up, head coach Rand Pecknold will have an interesting decision to make in replacing him.

Rising sophomore Skylar Brind’Amour is a strong candidate for the position, coming off of a first-year campaign in which he tallied four goals, nine assists, and was named Quinnipiac men’s ice hockey Rookie of the Year.

Another player that could possibly help fill the Fällström void is incoming first-year Ty Smilanic, one of the top prospects in the U.S. and a member of the U.S. National Team Development Program.

And of course, anchoring the first line for the Bobcats will be senior captain Odeen Tufto, who led the Bobcats in points this past season with 38.

Though the loss of Fällström is tough it is completely understandable. During this unique time, it is easy to see why an international athlete may be reluctant to returning to the U.S. in the midst of a pandemic. However, with this loss brings opportunity for Bobcats young and old to step up and pick up where they left off in 2020.