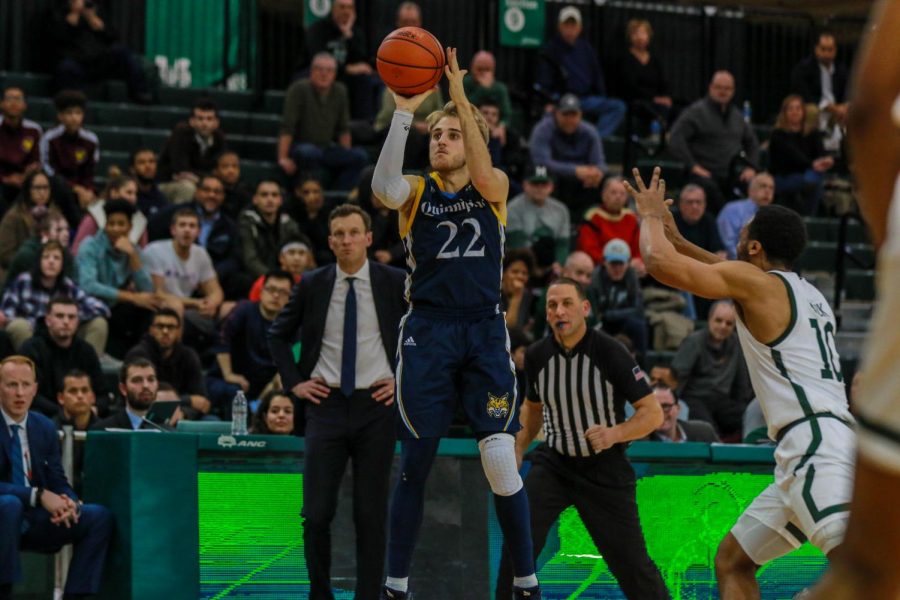 AND THE OSCAR GOES TO…

We’ve just passed the halfway point of the MAAC basketball regular season, and the Quinnipiac men’s basketball team is firmly in the race to win the conference for the first time ever. Sitting at 6-4 in the MAAC, the Bobcats find themselves just one game behind Monmouth for the top spot. Veteran leadership and the emergence of a few new faces have fueled Baker Dunleavy’s squad this year, and they have shown the ability to compete with anyone in the conference.

With the Oscars coming up this weekend, it’s only fair to give out some midseason awards to the brightest stars who walk down the People’s United Center’s red carpet.

OK, this one was a little obvious, but Baker Dunleavy’s coaching and scheming continue to impress with each passing game. After losing last year’s MAAC POTY and leading scorer in Cam Young, there was a massive hole to fill on the offense. Dunleavy constructed a balanced scoring attack in response: five players are averaging over 8 PPG, with three (Rich Kelly, Tyrese Williams, Kevin Marfo) averaging double digits.

Players like Matt Balanc and Brendan McGuire have shown tremendous growth with their first real playing time under Dunleavy’s system, and Aaron Falzon has fit in perfectly as well. As the home stretch is right around the bend, it should be exciting to watch Dunleavy’s young core continue to grow.

The definition of an adapted screenplay is “a script made for film or TV that is itself based from a previous work.” Aaron Falzon’s previous work came at Northwestern, where he started 43 games over the course of his four years with the Wildcats.

Now a grad transfer, Falzon has learned quickly with a new school, coach, team and system. He’s averaged just under 7 points a game with role player-type minutes, and he remains one of the team’s best deep threats. It’s safe to say that he’s adapted quite well.

It’s no secret that Quinnipiac plays a great deal of small ball. As the sport itself has evolved to this approach, Dunleavy has prioritized shooting and offensive efficiency over having the bigger bodies down low. With that said, the big men in such a system have to play extremely well to help the team produce on both ends.

The man has been an absolute force of nature this season, leading the entire nation in rebounding (13.2 RPG). He’s also taken a massive leap on the offensive end, averaging 10.2 PPG on 50.8% shooting, including 73% from the foul line. When the lack of size sometimes hinders the Bobcats defensively, Marfo is the cornerstone, the glue that keeps it all together.

Don’t let his one block per game fool you – Marfo is the stop sign for every opposing player who enters his paint, and he alters countless shots every time he’s on the floor. You can count me as one of those who didn’t really know what part Marfo would play this season, but he has carved out and cemented his role on this team: a total beast.

Being a leader is no easy job: your teammates look at you a little more often, the coaches ask for a little more production, and the lights all shine a little bit brighter when they hit your face. It takes someone with extreme courage, intestinal fortitude, and straight-up skill to thrive in the leadership position.

Rich Kelly was given the impossible task of filling the shoes of last year’s conference player of the year and pretty much running the team from a player’s perspective. Yet somehow, Kelly might end up doing an even better job – and he might lock up Quinnipiac’s second straight MAAC POTY as a result.

The star junior guard is second in the MAAC in PPG (17.1) and total points (342), and he recently eclipsed the 1,000 point mark for his career. But what makes Kelly truly special is his ability to create for his teammates. He’s third in the MAAC in both APG (4.6) and total assists (92).

Despite teams creating their entire gameplan around making life difficult for Quinnipiac’s catalyst, you’ll find him sitting at the top of the conference in 3-pt FG% (40.6%), FT% (87.6), and sixth in overall FG% (41.8%).

So yeah, being the leading man is tough for some. But for Rich Kelly, it’s just an excuse to get the acceptance speeches ready.