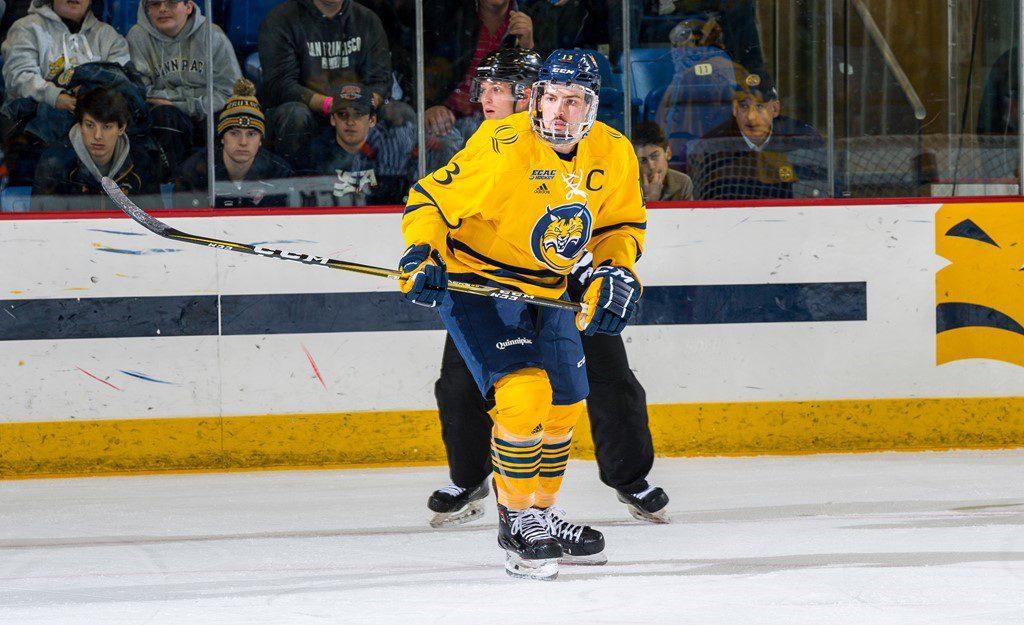 Chase Priskie hates to lose. The captain of the Quinnipiac men’s ice hockey team was visibly bothered when the Yale Bulldogs snapped the Bobcats’ 11 game undefeated streak against their rivals last month.

Yet on Friday night, Priskie was all smiles. Ninth seeded Quinnipiac avenged their regular season loss, winning Game 1 of the ECAC Hockey first round series against eighth seeded Yale by a score of 5-1.

“I just love beating Yale,” Priskie said. “I just do whatever I can to chip in offensively and defensively to help the team win.”

Priskie, who had the game winning goal, has dominated Yale since joining the rivalry. The junior has won six of his seven career games against the Bulldogs, scoring three goals and assisting on four.

It wasn’t just Priskie however. After trailing 1-0 at the end of the first period, four other Bobcats also scored, including two forwards who used to be defenseman.

Hamden native, Joe O’Connor tied the game two minutes into the second period for his second career goal. Senior Tanner MacMaster stole the puck near the blue line and dropped the puck back to O’Connor for a between the legs goal.

(Joe O’Connor ties the game at 1-1, 2:09 into the second period)
“(Joe) has been getting better and better,” head coach Rand Pecknold said. “We’re happy with his progression and the goal was big time. The stick between the legs and some skill. He’s a highly skilled guy, and he was a defenseman pretty much all his life, and now we’ve converted him to a forward. We’ve had some problems up front this year, and it was a huge goal for us.”

At the end of two periods, the game was tied 1-1. In big pressure scenarios, the best players rise to the occasion. For the Bobcats, it was their captain, Priskie, who put Quinnipiac on top, and their assistant captain, Kevin McKernan who put the game out of reach with his third goal of the season.

(Kevin McKernan gives Quinnipiac a 3-1 lead, 8:43 into the third period)
Typically a defenseman, McKernan was positioned at right wing Friday. The senior had only played one game as a forward before Friday, which was in his sophomore year. The change in position and time off due to injury since Feb. 9 would lead most to think he would need some time to adjust. Yet, McKernan shined when the spotlight was at it’s brightest.

“Playing forward is pretty tough, my legs felt a little heavy, but once I got into it, it wasn’t bad,” McKernan said. “I don’t mind (playing right wing). Running around the ice, hunting a little bit. It was a little fun. Playing with (Davidson) and (Forchuk) made it easy.”

Despite the lack of experience as a forward, Pecknold said he had a good feeling about changing the senior’s position.

“(McKernan) was good,” Pecknold said. “It was a hard decision to make as a coach. He played defense for us in the Frozen Four and the year we were number one in the country, he was one of our better (defenseman), but he’s been out for four weeks and hadn’t practiced, and the (defense) has been really good lately. It was a hunch, I thought he would give us some energy up front. We haven’t been as good up front as we’ve needed to be. I didn’t think he would score a goal tonight, but he was great. (He) killed penalties as a forward, he went back to (defense). I was really happy with him. He was a leader.”

With less than two minutes left, Alex Whelan scored his team leading 15th goal of the year on an empy-netter. Scott Davidson became the fifth Bobcat of the night to score, going five-hole in the final minute.

Defensively, Priskie was essential in shutting down Yale’s leading scorer, Joe Snively. Coming into the game, Snively had tallied 14 points in his last six games and boasted 17 goals and 19 assists on the year, putting him fifth in ECAC Hockey in points (36).

“We just didn’t give (Snively) any time and space,” Priskie said. “He’d get the puck, (we) pressed on him, and it’s tough to make plays under pressure. He didn’t really get anything tonight, so I was pretty happy with our (defense) as a whole.”

Before the game, Pecknold stressed the importance of puck possession. Quinnipiac thrived in this department thanks to winning 38 face offs and only losing 25. In particular, Scott Davidson (9-4), Nick Jermain (8-3), and Craig Martin (6-1) stood out.

“I thought the guys on the dot were really great tonight,” Pecknold said. “Good battle level. We talked about owning the dot and being aggressive and having our other four guys be committed to winning those loose pucks.”

“We were second to pucks all night long,” Allain said. “That’s the most important thing.”

Behind Quinnipiac’s defense was freshman Keith Petruzzelli who made his first career playoff start. Despite losing his first contest against the Bulldogs, the Detroit Red Wings prospect excelled in net, saving 21 of 22 Yale shots.

Petruzzelli did not play at all in the last weekend of the regular season due to injury, but did not show any signs of rust.

Quinnipiac will return to Ingalls Rink for Game 2 of the three game series, Saturday night at 7 p.m.