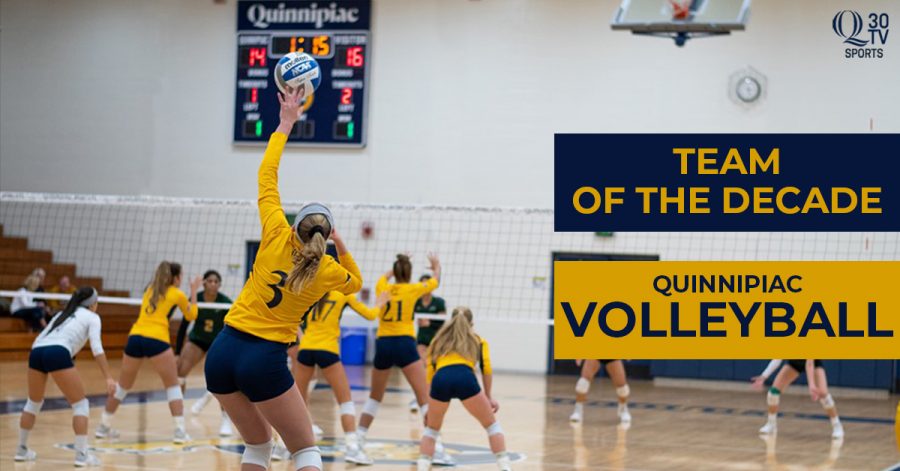 The 2010s for Quinnipiac volleyball could be described as a slow start with a stronger finish.

Starting out in the NEC, followed by switching over the MAAC in 2013, the program struggled to find victories. From the start of the decade to 2015, the Bobcats failed to reach a single season of more than six wins.

In 2016, Quinnipiac found success in a major way. Under head coach Kris Czaplinski, the program had its best regular season in the decade with a record of 21-13, finishing at third place in the MAAC.

This team would take down Niagara and Marist in the 2016 MAAC Tournament to reach the conference finals. The Bobcats would ultimately lose to a Fairfield Stags team that didn’t lose a single game in the conference that year.

Quinnipiac would then make the playoffs for three straight years after that, where in 2019 the Bobcats would have a similar postseason run to its 2016 campaign.

Under first-year head coach Kyle Robinson, the 2019 Bobcats battled to find consistency. Despite the up-and-down play, Quinnipiac was able to clinch the final spot in the MAAC Tournament with two games left in the season.

Once the playoffs began, Quinnipiac was able to find its stride. Sparked by the hitting of transfer students Olga Zampati and Georgia Tselepi, the Bobcats took down the #3 seed Rider and the #2 seed Canisius earning their second MAAC tournament final appearance in a memorable Cinderella story.

However, it was Fairfield yet again who ended Quinnipiac’s glory run, a 2019 Stags team that only lost once in conference play.

With all the awards and accolades surrounding Quinnipiac volleyball the past 10 years, it is only right that the best of these players should be honored for their performances.

Each team features a list of six players consisting of four hitters, a setter and a defensive specialist. The teams were organized based on their accolades, awards and accomplishments with the Quinnipiac volleyball program from 2010-2019. With each player, stats and notable achievements are listed providing the details for why each player made the specific team.
Quinnipiac Volleyball 2010s All-Decade First Team
Kat Miller (Outside Hitter)

If Katie Urycki wasn’t injured her senior season during 2016, would she have earned a MAAC first-team award that would have placed her into the Quinnipiac 2010s first-team?

Would Aryanah Diaz still earn her spot on the second team, or move up into a first team spot if she had an additional season of playing under Czaplinski?

Would Kaleigh Oates earn a first team spot if given more opportunities to play her junior season?

There are many “what ifs” that can be discussed with the making of these teams. Based on the events, awards and storylines that occurred with each of these players in this decade, there is no doubt that these 12 players deserve their recognition.