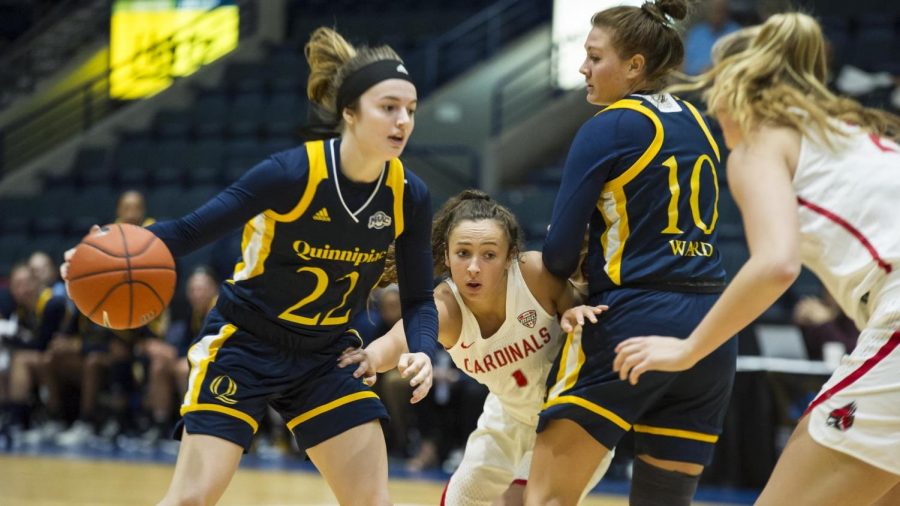 All good things must come to an end. Today, it was the Quinnipiac women’s basketball team’s four-game winning streak. Siena stunned Quinnipiac at home with a final score of 68-60. The Saints extended their win streak to five off of a solid second half performance, outscoring Quinnipiac 38-26. Here are three things the Bobcats could have done to come out victorious:

Quinnipiac was getting a lot of solid looks from the field, but many times they weren’t able to capitalize. Wide open threes were missed and solid fast break layups weren’t falling in the basket. Despite a double-double from Mackenzie DeWees consisting of 14 points and 10 rebounds on the day, there were times when she had open lanes to the basket off of a steal, but wasn’t able to finish her shot at the rim. One play in particular gave the Bobcats a chance to take lead down one at the end of the third quarter. Paige Warfel was able to find Jaden Ward wide open near the basket with a right-handed layup less than five seconds to go, but Ward blew the opportunity to take the lead as the buzzer sounded. Quinnipiac needs to be able to take advantage of open looks and quality shots they receive on offense to prevent digging themselves into a hole they can’t overcome.

The Bobcats shot below their average percentage of 32% from the beyond of arc. Shooting 26% from distance, Quinnipiac was not able to hit more than one three in each quarter, with the exception of the third where the team was 3-for-7. This hurt them the most in the fourth quarter, where the Bobcats did not hit a single three until the last 46 seconds of the game in a late effort to come back. To fix this, Quinnipiac has to find more creative ways to score down low, or seek to run more off-ball screens in a man set for their shooters. Getting more opportunities for Taylor Herd, Sajada Bonner and Cur’Tiera Haywood away from the pick and roll would allow for more open looks for the Bobcats to sink more threes in future games.

Quinnipiac may have missed Mikala Morris a little extra today, as they weren’t able to defend the paint the way they liked. The Saints outscored the Bobcats down low today, scoring 34 points in the paint to 28 for Quinnipiac. With Morris on the floor, she is able to provide that extra interior defense off the bench when Quinnipiac needs to rest Paige Warfel when she is locking down on layups and blocking shots as the starting center. With Morris sidelined, the team will have to call upon Jaden Ward and other forwards for extended help with inside defensive pressure.

The Bobcats will look to come back strong in their next game on the road, as they travel to Manhattan to take on the Jaspers. Last time they played Quinnipiac was able to take care of business at home, winning 70-58.