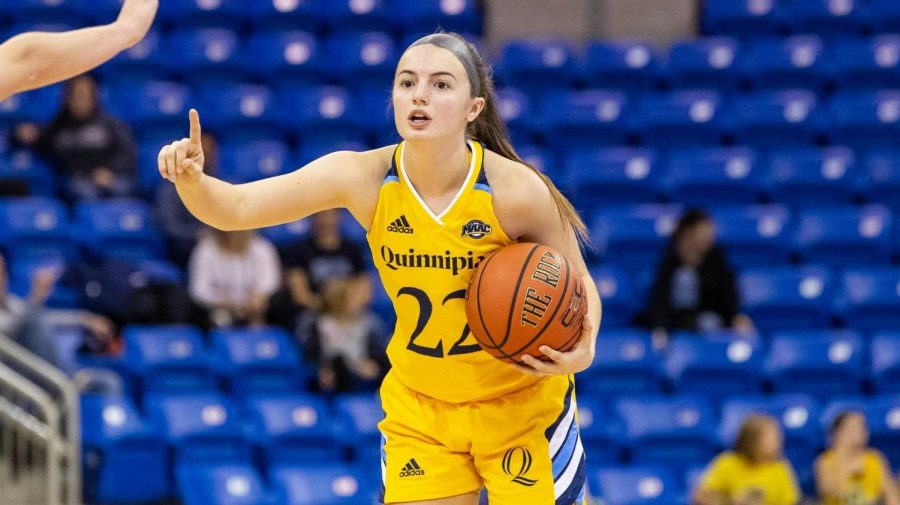 After a disappointing loss in their MAAC home opener on Sunday, the Quinnipiac women’s basketball team bounced back Monday with a 59-55 overtime win over Marist.

The Bobcats’ win breaks the Red Foxes’ 17-game MAAC win streak and ends the Hamden series in a split.

In a game motivated by rivalry history, it was a back-and-forth dogfight highlighted by Quinnipiac’s Mackenzie DeWees’ career-high 20-point, nine-rebound performance.

Amani Free was second behind DeWees in scoring with 15 points and five rebounds of her own.

“Amani Free and Mackenzie DeWees have been our most consistent performers,” head coach Tricia Fabbri said. “I know teams are game planning against Rose Caverly and Mikala Morris with good reason, but it’s really been Mackenzie DeWees and Amani Free’s contributions… They’ve been consistently our best role-player performers that have put us over the top.”
Bobcats End First Half with Lead
Quinnipiac didn’t wait long to get going in the first quarter, something that the team has struggled with all season.

This time the team came out attacking the basket, tallying seven attempts before Morris (eight points, 14 rebounds) started things off with a three-pointer. Marist held a slim one-point lead at the end of the first quarter, 13-12.

It was the second quarter where Quinnipiac found its rhythm, taking the early lead with a Free layup and never losing it.

Four Bobcats combined for 17 points in the quarter, Free leading the charge with eight points of her own. Quinnipiac led 29-20 heading into the second half of the game.

“They’re a very good defensive team and really clog things up for us, so for today the offensive adjustment was we needed to keep cutting and moving and not standing,” Fabbri said.
Caverly Takes It to Overtime
The Red Foxes used the third quarter to slowly chip away at Quinnipiac’s lead. Similar to the Bobcats’ team effort in the second, five Marist players combined for 17 points in the quarter compared to Quinnipiac’s 12 points.

The Bobcats’ halftime lead of nine had turned into a lead of four at the end of the third quarter, 41-37.

Marist turned up the heat in the fourth quarter, stringing together enough points to retake the lead with less than five minutes remaining for the first time since the first half.

Four more points from Marist put Quinnipiac down by four with just under three minutes of play left. A three-pointer and basket from DeWees brought the Bobcats within one with 13 seconds. Marist added one more point from a free throw to extend its lead by two with five seconds left, but Quinnipiac would not go quietly again.

Coming off of a Bobcat timeout, Caverly (13 points, six rebounds) worked the ball outside the paint before a two-step drive to the rim, floating the ball up and finding the net for the game-tying basket with 1.1 seconds on the clock.

“Coaches told me that if we can’t get it to [DeWees] then we’re getting it to you and make a play happen,” Caverly said. “They took [DeWees] away like they have the entire game, so I drove to the basket and hoped for the best.”

Regulation ended with a Morris steal and, all tied up at 50-50, the rivals headed into overtime.
A Dominant DeWees and the Free Factor
Back-and-forth free throws and baskets from both teams opened up overtime play. After two good free throws from Marist’s Willow Duffell, it was tied up again at 55-55 with just over one minute remaining.

Quinnipiac looked to DeWees on the next possession, and she found a wide-open Free under the basket to retake the lead in the final seconds of the game.

“That’s communication,” DeWees said. “[Free] was calling for the ball and we had just talked before the game about calling for the ball, telling people where you’re going… if she didn’t say anything I would have never known she was there, so kudos to her because she wanted that bucket and she wanted to win that game just as much as the rest of us did.”

Caverly went to the line to finish the game she had sent into overtime. With the final two free throws, Quinnipiac took the game 59-55 and snapped Marist’s 17-game MAAC win streak.

“It’s what people have come to expect between Quinnipiac and Marist, that rivalry,” Fabbri said. “I think today we did not disappoint in that game… Today we served up one.”

The Bobcats are back at home next weekend to continue MAAC play against the Siena Saints at 1 p.m.