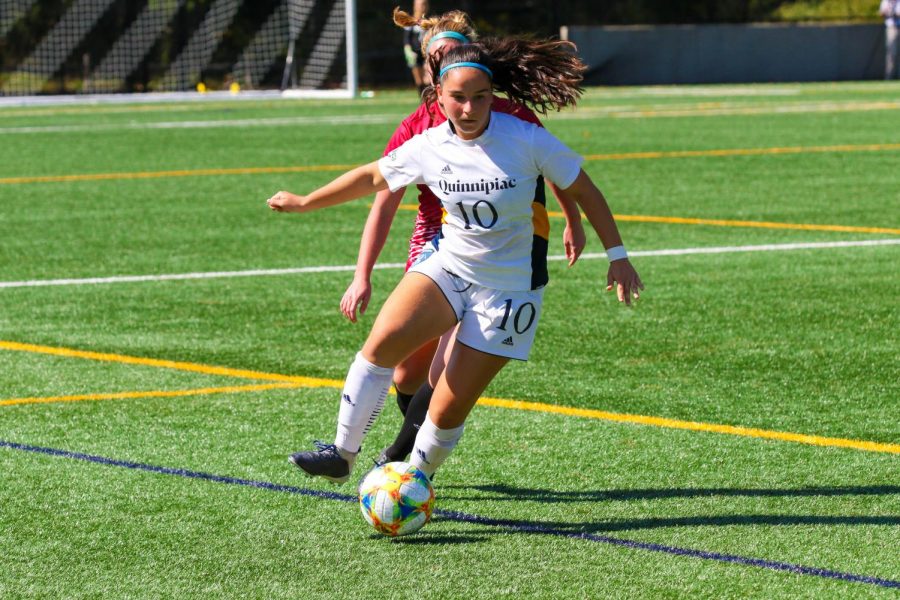 After a 1-0 win against Fairfield on Tuesday, the Quinnipiac Bobcats women’s soccer team found themselves up against the Stags once again, but this time in the quarterfinals of the MAAC Championship.

The Bobcats got a late game-winning goal, courtesy of first-year Rebecca Cooke with just three minutes and 13 seconds to go in double overtime.

Cooke found herself clean through on goal, and was able to push the ball to the goalkeeper’s right, and tucked it home with her left foot into the open goal.

With a similar chance earlier in the week missed by Cooke against Fairfield, head coach Dave Clarke had all the confidence that his player was going to score.

“In the previous game she took the touch to the right, and the keeper saved it,” Clarke said. “I told her what to learn from this, and she probably doesn’t score that (the game-winner today) if she misses the one on Tuesday.”

While Cooke may have scored the game-winner, the game was also won by a solid defensive performance, headlined by first-year goalkeeper, Sofia Lospinoso.

Having not conceded a goal in her last three appearances, Clarke noted a more confident Lospinoso, both in shot saving ability and, more specifically, with the ball at her feet.

“She took a touch and played it out even whilst the Fairfield team was yelling at her, which gave us a new avenue to play through, rather than just playing out of the back,” said Clarke.

With a short turnaround time between games, Clarke talked about his team’s mindset after their win.

“We told them to enjoy the game, but as soon as we walk off the field it’s onto either Monmouth or Niagara,” Clarke said.

After Monmouth pulled out its victory, Quinnipiac has just three days to recover, until the semifinals at home on Monday at 3 p.m. against the Hawks.