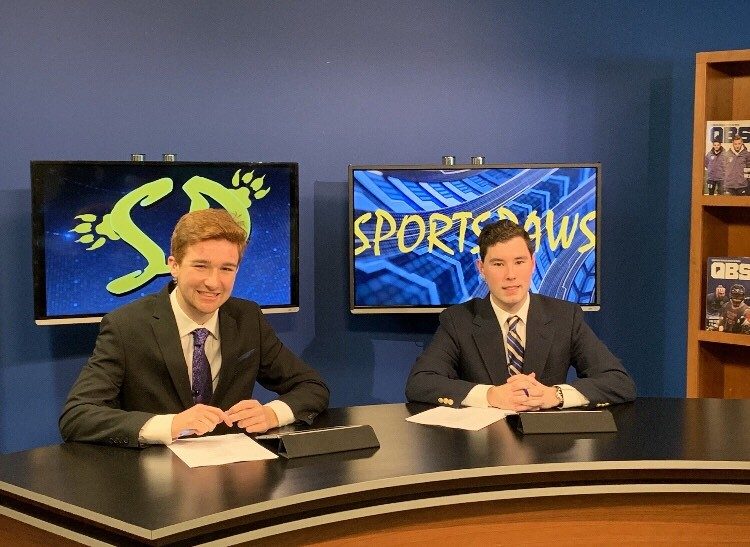 This week’s edition of Sports Paws was hosted by Chris Longchamp and Connor Ullathorne.

Chris and Connor began the show by reaping the Quinnipiac men’s ice hockey team’s impressive weekend with big wins over No. 1 Cornell and Colgate. The anchors also looked at the ECAC men’s ice hockey standings and the USCHO PairWise poll to show where the Bobcats sit in the standings.

The men’s basketball team was also in action this past weekend as they faced off against MAAC opponents Canisius and Niagara, splitting the weekend with a win and a loss respectively. Men’s basketball beat reporter Bryan Schwartz was in studio to give his contenders and pretenders in the MAAC so far.

Meanwhile the women’s ice hockey team also had an impressive weekend picking up two wins against rivals Brown and Yale. Quinnipiac goalie Abbie Ives played a pivotal role in the wins tallying 47 saves on 49 shots over the weekend.

The women’s basketball team picked up two wins last week, beating both Saint Peter’s and Iona on the road. The Bobcats currently sit in fourth in the MAAC but are getting more and more dangerous with every game.

Finally, the Quinnipiac men’s lacrosse team opened their season in New Jersey against the No. 20 Rutgers. The Bobcats fell short in their opening game. The team’s beat reporter, Jon Surratt, gave his outlook on the season and what to expect from the team this year.