The Paulo Project: Soares Rises From Quinnipiac to MLS Next Pro League 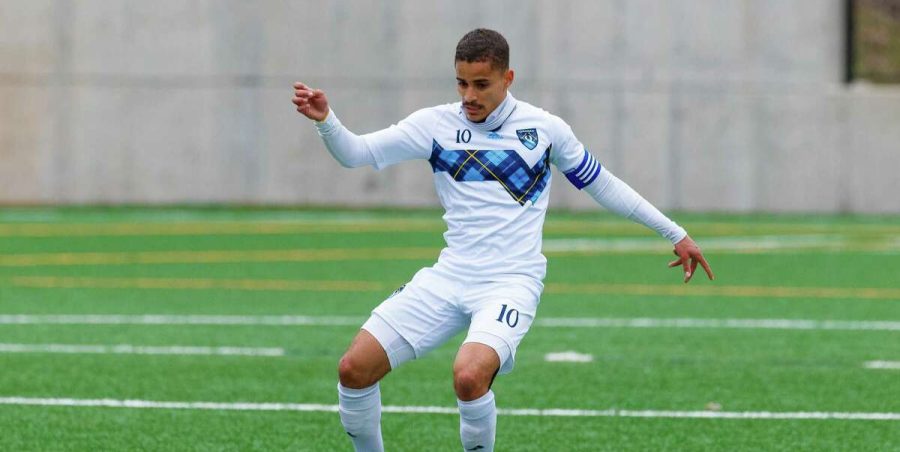 Paulo Soares is a terrible rash.

From his early childhood in Cape Verde to signing with Rochester New York FC in February of 2022, Soares has worked his way up to the professional level, and is not going away any time soon.

“I wouldn’t call it ‘academy’ because as you may know in Cape Verde, it’s not as structured as here in the US.”

The first episode of “The Paulo Project” is officially out! Former @QU_MSOC and current @rnyfcofficial player Paulo Soares discusses his first memory on the pitch. pic.twitter.com/tZbXwANEd0

Born in America, Soares went back to Cape Verde and lived there through his adolescence, constantly growing his passion for the beautiful game.

“I think it’s not just because I grew up in a family, but also in Cape Verde where everything is about soccer, everyone is just passionate about soccer,” Soares said. “So when you grow up, everything is just about soccer and especially when I was younger it was the only thing that we would do.”

Growing up playing on dirt fields covered with sand and rocks, Soares still held his desire to compete at the next level, and with big teams slowly seeing his talent, it was only a matter of time before he made his next big move.

However, during this whole process there was a problem centered around one thing: education.

While Paulo wanted to follow in his friend’s footsteps and join an academy in Europe, his parents had other ideas. They wanted to push him to go to America and gain an education alongside progressing in his soccer career, so that’s what he did.

“After coming to the US, I figured I wouldn’t be dwelling on the decision. I would just take advantage of what was given to me.”

In Episode 2 of “The Paulo Project” former @QU_MSOC and current @rnyfcofficial player @Paulofsoares7 discusses his move to the US as a teenager. pic.twitter.com/Cj8nAz5rpM

“I think that coming to the U.S. was the decision my family had made for me,” Soares said. “I wasn’t happy. I wasn’t happy at first because I was just playing with the national team in the Olympic games, and a lot of my friends had left to go to Europe. They sent me [to Boston] to continue my education and career instead.”

Paulo enrolled at Quincy High School and was a stalwart there over his four years.

With a stellar squad assembled there, Paulo had the opportunity to play in front of coaches from UConn, Southern Connecticut State, and many other New England based Division I schools. Having constant eyes on him, Soares attracted many offers to play, but he wasn’t able to take them.

Due to his move to America in the middle of high school, Soares was having trouble gaining NCAA eligibility, giving many teams no choice but to pull their offers.

Soares talked with his father and they both agreed he would attend Quinnipiac University as a student, and “walk on” due to the roster already being full.

“I became eligible very very late, probably a month before pre season,” Soares said. “At this point most teams were already very packed and all the scholarships were already given.”

Having been in communication with the coaches throughout the whole process, Soares was given a chance but nothing more.

“We got in late with him and with our roster basically full at that point, we basically told Paulo ‘we’ll get you in, but you have to work your way into the lineup and into the team,’ which he did without hesitation,” Eric Da Costa, Quinnipiac men’s soccer head coach said.

The coaches saw Soares as a diamond in the rough type player and already could see his potential, they just needed to get it out of him.

“He immediately made an impact and his qualities go far beyond what he can do on the field,” Da Costa said. “It’s his professionalism, how he approaches training, his mentality when he faced injuries, all these things helped me to overcome the obstacles he faced as easily as he did.”

“I was lucky to find players there that caught some attention from Uconn and other schools.”

In Episode 3 of “The Paulo Project” I sat down with former @QU_MSOC and current @rnyfcofficial player @Paulofsoares7 to discuss his first year playing at Quinnipiac University. pic.twitter.com/ZcMxgc5kpH

After starting one of the first games in his freshman season, Soares immediately became a star and was called into the Cape Verdean National team at the same time.

“I came back from national team camp injured,” Soares said. “I recovered throughout the season and played against Vermont, but just before the Albany game, I was stretching for a ball and immediately felt something in my hamstring. I walked right off the field and came back for the playoffs, but they didn’t want to risk me.”

With two consecutive injuries, Paulo needed a season to rest and get his body fully ready. 2020 was that season.

Due to the Covid-19 pandemic, the season was moved from the fall to the spring, and the seasons that followed were the best he ever had in a Quinnipiac shirt.

“I was playing very well towards the beginning of the season, but he just ran through my knee.”

In Episode 4 of “The Paulo Project” I sat down with former @QU_MSOC and current @rnyfcofficial midfielder @Paulofsoares7 to discuss injuries and Covid.

Soares graduated in 2022, having worn the armband for those past two years and leading his team to a MAAC finals in 2021.

With Quinnipiac soccer officially done, Paulo then had to figure out what was next for him, and soccer was ever present on his mind.

After waiting for offers from other places, Soares eventually accepted one with Rochester New York FC in the MLS Next Pro League.

“I don’t even know how it came about because I was looking forward to moving into Europe, especially Portugal,” Soares said. “However this opportunity came, and I felt this was the right decision for me. I believe I can learn a lot here and eventually take my game to the next level.”

Although Soares hasn’t made an appearance for RNYFC yet, he has already attained a leadership position and is working his way back from injury and into a big role for this team.

“As soon as he is able to make himself seen, you’re not going to be able to ignore him,” Da Costa said. “He’s just going to be there. He’s like a bad rash: it just keeps popping up and you’ve got no choice but to treat it. That’s how you are able to handle Paulo. You see him everyday and you have no choice but to put him in a leadership position and play him.”

“And this has been the Paulo Project”

In the final episode of “The Paulo Project” I talked with former @QU_MSOC and current @rnyfcofficial player @Paulofsoares7 about his ambitions for the rest of his first professional season.

Paulo’s abilities on the field are undeniable and his mindset and determination are the reason that he is going to make it in this industry.

“He’ll do what he knows is necessary to get things done,” Soares said. “Those guys in the lower levels aren’t getting paid big money to play, so you really have to be strong minded and dedicated to get through this initial phase of hard travel, not a lot of money, and iffy conditions, but if you get through this stage the sky’s the limit.”