Warfel leads Bobcats to first win of the year over Bucknell 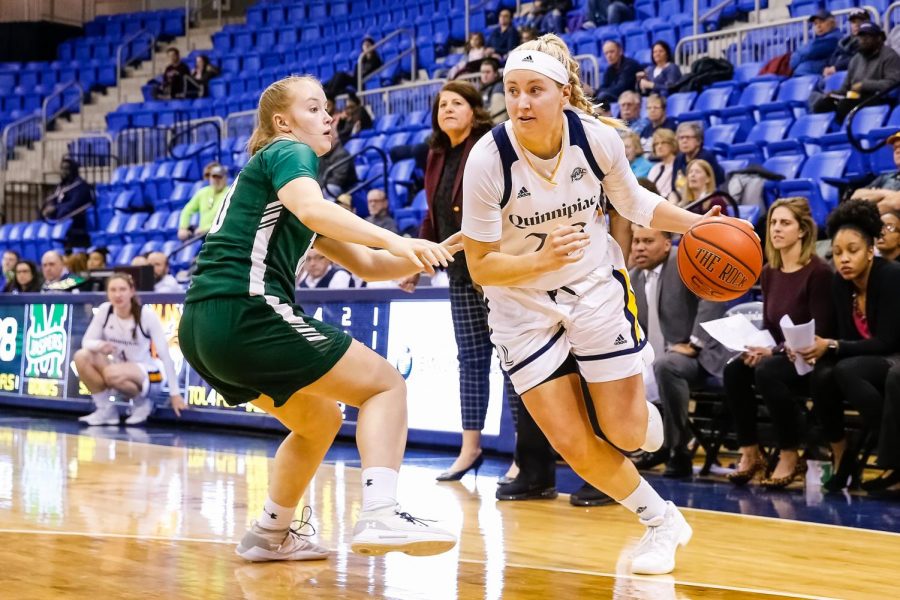 The Quinnipiac women’s basketball team took on Bucknell in a home match-up Saturday afternoon. Bucknell came into today’s game with a record of 2-1, while Quinnipiac was still searching for its first win of the young season.

Quinnipiac was finally able to scratch one in the win column, as the Bobcats took down Bucknell 76-69.

“We were two possessions short in our last two games and today we were not to be denied against a great Bucknell team,” Quinnipiac head coach Tricia Fabbri said. “Really happy for my coaching staff and my players to earn the result.”

After starting the season 0-2, the Bobcats got off to a promising start in the first quarter, grabbing the lead and maintaining it throughout the entire quarter.

The Bobcats showed no signs of slowing down in the second quarter, shooting an impressive 60% from behind the three-point line and 53% from the floor.

Senior Paige Warfel ended the game with her second double-double of the season, scoring 17 points and grabbing 11 rebounds. Two other Bobcats reach double-digit scoring on the day: Mikala Morris with 12 and junior Shaq Edwards with 14.

“We’ve been working so hard in practice and correcting where we went wrong in the last games, and we finally we able to finish strong in the second half and come out with that win, and it feels amazing,” Warfel said.

10 out of the 11 Bobcat players on the court scored points on the afternoon.

“It was our energy and our bench,” Edwards said. “I feel like we came out in other two games with the same intensity but I feel like it lacked toward the second and third quarter, so I feel like the energy was better.”

Junior Chiara Bacchini, who has been sidelined since Dec. 8 of 2018 due to injury, saw some court action today. She nailed her first point since Dec. 2 to 2018—a three pointer.

“I was so happy,” Bacchini said. “I can’t even explain how I felt, it was fantastic.”

Quinnipiac continued to handle the lead throughout the third quarter, going up by as much as 12. Edwards came up with a couple of big threes for the Bobcats, and Quinnipiac had the 58-50 lead going into the final quarter.

The Bobcats set the pace in the fourth quarter once again, keeping a solid lead over the Bison. Despite a huge 33-point game from Bucknell’s senior Ellie Mack, the Bison offense could not overcome the Bobcats.

The result for the Bobcats today goes beyond just adding a win to their record.

“As a veteran coach, you have to take a bigger picture, pull it back and understand that you can’t skip steps, and this is all part of our growing process,” Fabbri said. “I think you’re starting to see more of an identity of who we are and a growth for us.

The Bobcats look to build on today’s win in their next game on Nov. 24 against No. 8 Maryland at the Xfinity Center in College Park, MD. Tipoff is set for 12 p.m.